With quality performances on Thursday night (4/14), the Flatbush JV Indoor Soccer teams each moved one step closer to securing playoff berths in the 2016 MYHSAL Soccer postseason.

The boys battled a revamped Ezra squad at the Falcons Nest, and it was clear from the start this was not the same team the Falcons mercy-ruled 7-0 earlier in the season.  This was was bigger and stronger, and clearly a little bit older.  TO counter that, the Flatbush boys showed they have take the lessons of Coach Eli Amzalag and to heart, and they played a very technical brand of soccer.

The game was a back-and-froth battle, see-sawing over the four quarters, neither team able to get a big lead.  The Flatbush attack was spearheaded by the diminutive captain, Ohad Reichman, who provided half of the Falcons offense on the night (he would record yet another 3-goal hat trick).  But it was the defense that was key, with Ricky Levy and Yaron Sternberg patrolling the back line and Eddie Sabbagh providing solid goalkeeping in the net.  The Falcons battled the bigger and stronger Eagles all game, keeping the game in striking distance. 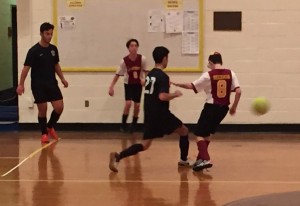 With the score knotted at 5-5 in the final period, each team looked to press its advantage to get that next goal.  It was the skilled play of Flatbush that came through first, giving the Falcons what they hoped would be the game-winner with just under three minutes to play.  But it was short-lived, as Ezra’s physical play allowed them to power a shot that spun through the Falcon defense and just squeaked past a sprawling Sabbagh to cross the goal line to tie the game at 6-6. 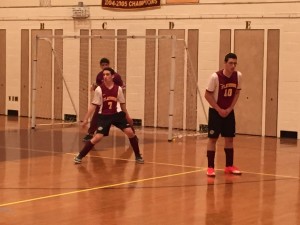 The game would go to overtime, where eahc team looked for the golden goal that would end the game in their favor.  Sabbagh answered every challenge in the overtime, but so did Ezra, though Reichman came close for Flatbush, sending a cross just over the crossbar in the final minute of play. 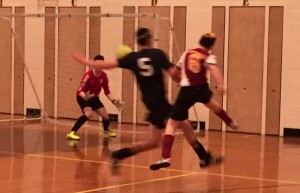 It was a tough draw for the home Falcons, but the JV Boys earned a point in the standings for their effort.  They now have one game remaining on the season, and will need to wait and see how the rest of the league’s teams finish out to see if they have done enough to secure a place in the playoffs, and a shot at a JV championship.

The Girls traveled to Queens, NY for a road doubleheader with the Central Wildcats, and for the JV Girls, it was a game that would go a long way to determining which of the two teams would be in good position to qualify for the playoffs going forward. 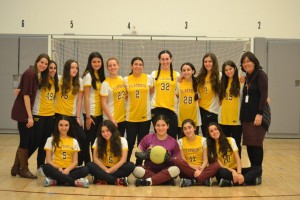 To prepare for this game, Coaches Edie Koslowe and Evelyn Shterenzer had the girls playing in diamond formation and they were definitely ready to give Central a run for their money.  Raquel Keda got the Falcons off to a great start, scoring the first goal of the game and giving Flatbush a 1-0 lead that they held at the end of the first period.  Central came back to even the score, though, and it was a back-and-forth flow from that point on.  Esther Hidary scored the Falcons second goal, but again.Central answered to tie the score.

By the fourth quarter, Central looked determined not to let Flatbush defeat them on their home court, but the Falcon JV’s continued to to defend well, led by Co-Captain Goalkeeper Renee Gindi.  Gindi was outstanding in turning away every effort from the Wildcats to put more points on the board. With the clock winding down, and it looking like an extra session might be in order, Raquel Oved scored the goal that put Flatbush over the top, sealing the victory. The win put the Falcons over the .500 mark at 4-3 on the season with one game remaining. 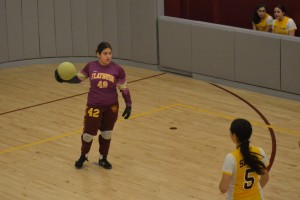 After the JV Girls completed their contest, the Varsity Girls played their last game of the season, and it was a frustrating one.  The Coopersmith sisters, as they have done all season long, succeeded in getting Flatbush on the board first, opening the game with the a goal in the first quarter.  But it was all that the Falcons would get past the Central Keeper all night.  Immediately after, Central, dominated the game the rest of the way, defeating Flatbush by the League’s mercy rule, 12-1 at the end of the third period.

The JV Boys are now alone in second place in the MYHSAL’s Central Division, with one game to play.  A win at YDE in the final game of the regular season on Monday, 4/18 (8:30 pm start time) will insure the Flatbush can finish with no less that the fifth best overall record in the League.  (If SAR loses its final two games, Flatbush could finish with the 4th best record).

The JV Girls will look to avenge an early season loss in their final game of the season when they host Ma’ayanot after Pesach break on Wednesday, 5/4.  That game could have a major impact on playoff qualification and seeding, as it is the penultimate game of the MYHSAL JV Girls Indoor Soccer regular season.  The ball will be put in play at 7:15 pm in the Falcons Nest.