On Monday evening (3/20), the Flatbush Falcons hosted the SAR Sting in a Boys/Girls JV Doubleheader, and though the home teams played improved soccer, the teams fell to their SAR counterparts in both games at the Falcons Nest in Brooklyn, NY. 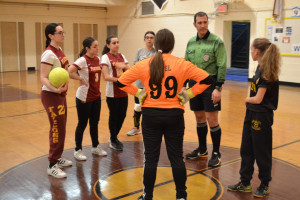 The Boys JV opened the night program, and the two teams played even soccer for half of the opening period, with Flatbush getting strong defensive play from Nathan Sidaoui and Jack Shalom.  But, SAR pressed the play after the teams’ coaches made their first player switch, catching the Falcons in transition and squeaking the ball just under the reach of Falcons Goalie Steven Hafif to open the scoring.  Two and a half minutes later, a sharp Sting blast from 29 feet out made it a 2-0 game. With under a minute to play, another shot in transition led to another SAR score, and the Sting held a 3-0 advantage after one period of play. 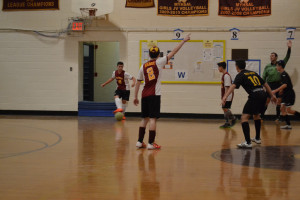 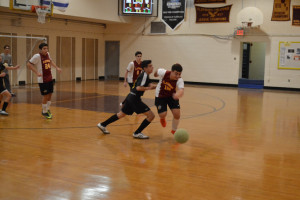 At the outset of the 2nd Period, Josh Wicentowsky nearly got Flatbush on the board, but the ball skidded past the SAR goal.  Two minutes in, though. Albert Hamui did, drilling the ball high over the SAR goalie’s left shoulder. Then, Hafif came up huge with a beautiful stop on a penalty kick.   The momentum was short lived, though, as a few moments later, SAR knocked home a loose ball to get back the goal.  And, 30 seconds later, SAR put another one in for. 5-1 lead.  Jack Zeitouny was then inserted in goal, and he came up with a few stops, but SAR managed a few more scores, and the Sting held a 7-1 lead at the half. 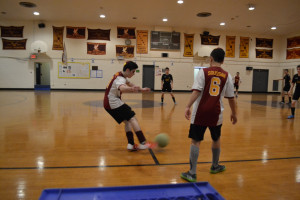 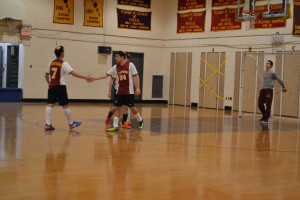 Like the opening period, the second half began with the two teams playing nearly half of it before a goal was scored. Unlike the opener, this time the goal was scored by Flatbush.  SAR was looking to clear, when Wicentowsky blocked the clearing attempt directly into the Sting  goal.  Unfortunately, it only took a minute for SAR to get the goal right back. Another minute on, and SAR had built a 7-goal cushion.  Flatbush got one last gasp from Abie Soussan and Wicentowsky, but SAR stopped the rush, and took home the 10-2 mercy victory. 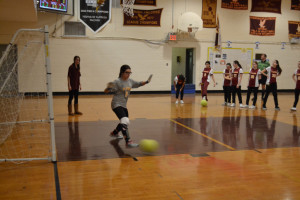 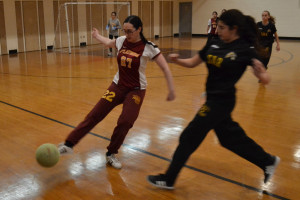 Fifteen minutes later, the JV Girls took center stage, and Flatbush’s Sophomore Betty Greenberg nearly scored on a long high floater, but was denied by a nice high corner save. After 4 minutes of even play, SAR capitalized on a misplayed ball that got behind the Falcon zone and SAR sent the ball home for the opening score. At the five minute mark of the opening period, Flatbush shocked the Sting as they managed to even the game on a goal from Alice Franco on a rebound of a Danielle Tawil shot.  Tawil then nearly gave Flatbush the lead, but her one timer from five feet away went over the crossbar.  But defense was the order of the day so far, with Flatbush’s Linda Benun turning in the play of the game as she smartly stayed on the goal line, and with Julie Saadia out of position after defending a shot in the corner, she calmly cleared away a loose ball just moments before it would cross the goal line.  After one period of play, it was tied at 1-1. 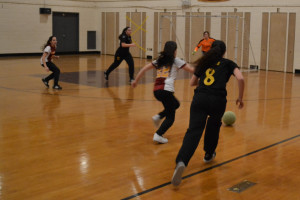 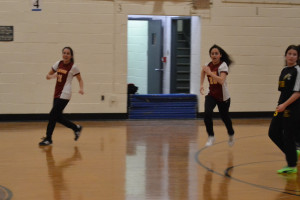 The pace of play picked up in period two, and the defenses rose up along with it. Flatbush nearly took the lead on a flurry from Barbara Dayan and Danielle Tawil, but nothing came of it.  For their part, the Falcons got great defensive play from Greenberg, Benun and Jacqueline Mann with Sophomore Rookie Goalie Julie Saadia getting more comfortable in the net. Ultimately, both teams defenses stood tall, and at intermission the score was still even at 1-1. 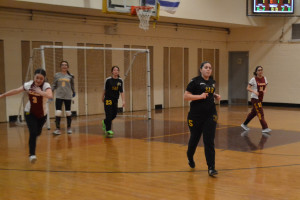 Flatbush was playing with confidence, and had the momentum, as SAR clearly did not expect to be tied at this juncture of the game.  But with two minutes gone, Flatbush misplayed a ball in the corner, and SAR floated it over Saadia to take back the lead. Flatbush did get a few rushes from Raquel Oved, along with a great kick save from Saadia, but the next goal was SAR’s when they hit one home from a hard angle.  A misplay on defense led to a loose ball that the Sting knocked home for a 4-1 lead, which they held heading into the final period of play. 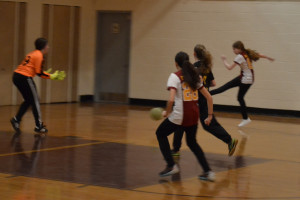 At this point, no one would have been surprised if the home team folded.  But, they found an inner reserve and began to push back hard against the Sting.  As a result, Flatbush nearly blocked home a goal on the opening play, but SAR followed with two quick ones, and with 1:30 gone, SAR had a commanding 6-1 lead. As noted before, though, Flatbush had no quit in them. Danielle Tawil kept pressing for that next goal, and though she did not get it, teammate Oved finally did on a rebound of a Raquel Keda shot.  Oved came up with another goal when she blocked the SAR goalie’s attempt to clear right back into the met.  Flatbush could get no closer, and the game finished with SAR claiming the 6-3 victory. 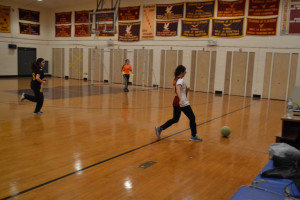 The loss notwithstanding, Head Coach Edie Koslowe was exceedingly proud of the effort put forth by her girls.  “What a huge difference from our opening game to this one,” beamed Koslowe afterwards.  “We went over the game plan moments before the start, and the girls really put it into practice, keeping SAR on their heels the entire opening half.  If not for a few bad breaks, we were right there.  And, I love that we kept playing hard right to the end.  We are definitely moving in the right direction!”  Additionally, Coach Koslowe managed to get nearly every player on the 24-girl roster, which is very impressive considering only 5 players can be on the court at any one time, and one of those players is the goalie!