The Flatbush JV Boys Hockey team put on another late run that fell short by a score of 10-7 while the Varsity Boys never trailed on their way to their second win of the season (by a score of 6-3) as the teams split their home opening doubleheader Monday night (11/6) with the North Shore Stars at the Aux Nest in Brooklyn, NY. 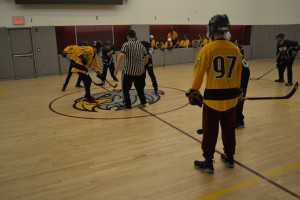 The JV Boys took the floor first and proceeded to dig themselves a huge hole.  They scored the first goal of the game with only seconds gone when Joseph Maymie put the puck home off a pass from Marty Elmekies.  It was downhill from there, as the Stars scored the next 5 goals.   Over the span of the first two periods, they let the Stars jump out to a commanding lead of 8-3.  The Falcons appeared to get a wake-up call during the second intermission, and all of a sudden their sticks came alive as they found the net again and again, shrinking the deficit to a mere two goals.  But, it was another case of too little, too late as they could get no closer, falling by a score of 10-7. 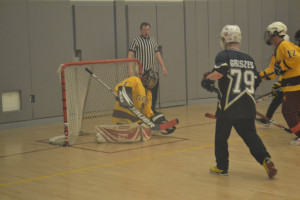 Head coach Ruvin Levavi was equally proud and frustrated by the performance of his young JV’s.  “It has been a recurring theme with this team.  We get off to a slow start, dig ourselves a huge hole, then put out a great effort late to make it a close game.”  Levavi reiterated, “we need to bring the energy of the third period to bear right from the opening drop, and I am confident going forward the boys will respond.” 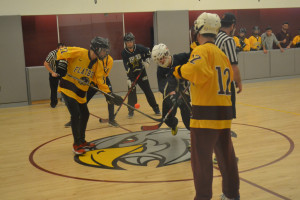 The Varsities were up next, and they spent the better part of the first half of the opening period sizing each other up.  The even play came to an end when the Stars put a flurry of shots on Reserve Goaltender Michael Chattah (playing for the Falcons ill captain and regular netminder Sol Laniado) forcing him to come up with a most acrobatic save to keep the game scoreless. It would be Flatbush that would put up the first point on the scoreboard when Ricky Esses came through.  Only moments earlier he had to step off the floor, having to get not just one, but both of his shoes back on his feet.  He returned, and took a clearing pass from Defenseman Eddie Sorscher which he stuck over the outstretched leg of the Stars goalie at the 6:30 mark. 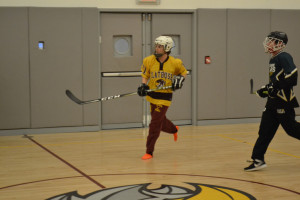 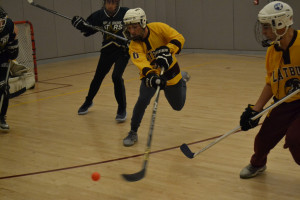 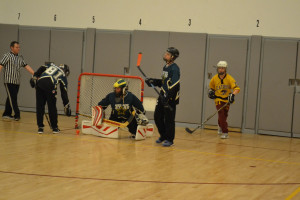 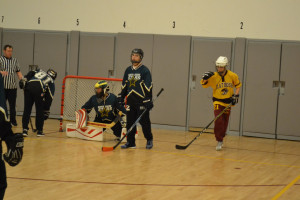 North Shore got the equalizer two minutes later when the Falcons defense let the ball roll loose in their own zone.  Late in the period, Sorscher took a penalty.  A little bit of luck (the ball launched up and over the back of Chattah right off the face off to his left, but it just made the top of the upper pipe and bounced back in front of the Junior goalie), along with solid penalty killing from Daniel Srour, Rafi Nemet and Steven Sutton killed off the remainder of the penalty, and the teams headed into the first intermission tied at 1-1.

It took only two minutes of the second period for Flatbush to retake the lead, as Mo Goldman flat out beat the star ‘tender.  Goldman would strike again at the 5:13 mark on a spinning backhand just moments after the Stars successfully killed off their first penalty of the game.Less than a minute later, Albert Saad made it a three-goal lead as he pressured the North Shore net; Joe Sutton registered the assist. 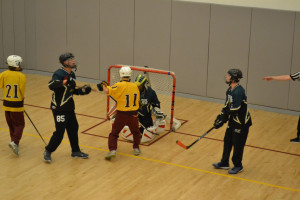 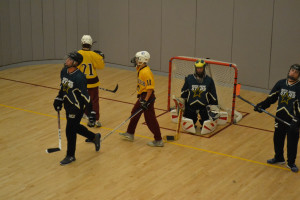 That cushion was lessened a mere 9 second later when North Shore got one of the goals back.  The Stars now had the momentum, and they kept the pressure on.  With about two minutes remaining, a deflection off a Falcon defender scooted past Chattah’s outstretched foot, and that quickly it was a one-goal game.  Leave it to Goldman to again step up, a seconds later he registered his third goal of the game.  With 1;32 left int eh period, Goldman and North Shore’s Perlmutter were sent off for a scuffle.  The teams went head to head in 3-v-3 competition the rest of the period.  When the buzzer sounded, Flatbush held a 5-3 lead with one period left to play. 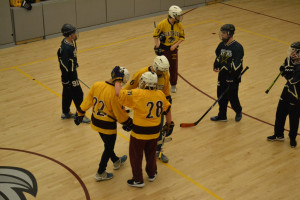 The Falcon defense struggled to clear the ball early on, and only a fantastic Chattah kick-save preserved the two-goal lead.  it was as if that were a wake-up call for the home squad, as from that point on Flatbush carried the play, with the majority of the final period played in the Stars end of the court.  With time running out, the Stars pulled their goalie, and Goldman iced the game with an open net goal driven home with 21.1 second remaining when Esses knocked the ball into the Stars zone to lead the wide open Goldman.  It was a complete effort, and a well-earned victory. 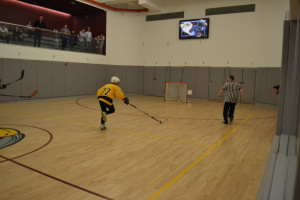 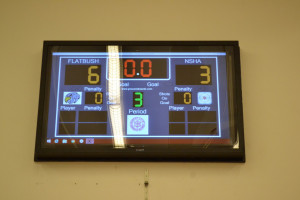 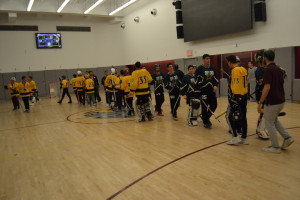 NEST NOTES:  The Falcons played these games with heavy hearts, with many of them weighted down with grief for their fellow classmates who are mourning the sudden loss of their mother, Naomi Houllou ע”ה.

Mo Goldman netted four goals on the night for the Varsity.  Michael Chattah was outstanding in goal, yielding only 3 opposing scores on a vast number of Stars shots on goal for the game.

The Varsity Boys have a few days to enjoy the win before they return to action for a Saturday night contest with cross-town rival YDE Thunder in the Aux Nest.  Game time is 7:00 pm. The JV’s take on YDE the next day when they make the trip down Coney Island Avenue for a 5:00 pm showdown on the Thunder’s home court.