Needing a win on Sunday afternoon (12/24) in their final game of the regular season to qualify for the playoffs, the Flatbush Flag Football team got the big defensive stop they needed to deny the DRS Wildcats a tying score on their final possession.  The hold of the Wildcat offense allowed the Falcons to close out a 14-6 win on the turf field at Lawrence HS on Long Island, and put Flatbush in the playoffs in just their inaugural season in the Mesivta Football League. 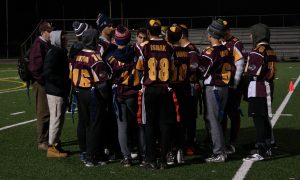 With Sol Laniado back behind the offensive line for Flatbush, the team felt confident their efforts would be fruitful on the afternoon, but by halftime neither team was able to generate any popint production.  That changed on the first offensive set of the second half for the Falcons.  Laniado engineered a drive down the field, and capped it off with a 5-yard completion to David Cohen for the touchdown.  Sol Franco pulled in the 1-yard conversion attempt, and suddenly Flatbush held a 7-0 advantage.  Later in the half, Flatbush doubled their lead when Laniado broke loose from scrimmage and scampered 60 yards for the touchdown.  Again, Laniado found Franco for the extra point conversion and the Falcons had a commanding 14-0 lead. 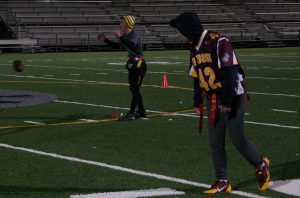 But, it would not be that easy.  DRS finally found success on offense, scoring on a rushing TD as the Wildcat runner eluded the Flatbush tacklers.  After stopping the Falcon offense, DRS had the ball with one last chance to even the score and perhaps send the game to overtime.  The Flatbush defense had other ideas, though.  Spearheaded by linebacker Eddie Sorscher,  who had a big sack on 4th down earlier in the 4th quarter, the Falcon defense stood tall, and stopped the Wildcats on their final drive.  The score stood at 14-6  Flatbush as the final seconds ticked away, ensuring the Falcons of a spot in the playoffs in their first season in the League. 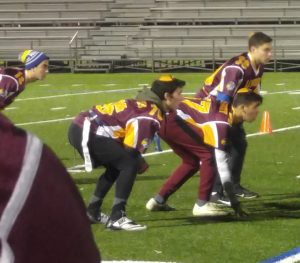 NEST NOTES:  The win puts the team’s record for the season at 4-5 and secures a playoff spot for Flatbush, who must wait until the final League games are played on Sunday, December 31, to see who they will face in the first round.  The likely date for that initial playoff game will be Sunday, January 7, 2018.