On a frozen field (literally) on Saturday night (1/13), the inaugural season of Flatbush Varsity Flag Football came to an abrupt end as the Falcons fell, 13–0, to the Mesivta Ateret Yaakov Eagles in the opening round of the MFL playoffs at the Aviator Sports Complex in Brooklyn, NY.

The temperature was more akin to January Pro Football in Green Bay rather high school football in New York, but the 6th seeded Flatbush Falcons and the 3rd seeded MAY Eagles were as warmed up as they could be as they took the to the field for the final opening round playoff game of the night (5th seeded YDE had just defeated 4th seeded Shaare Torah in the earlier game of the night). 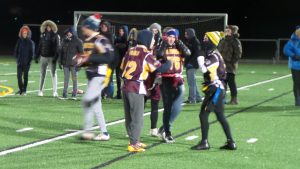 Flatbush Captains Charel Zeitoune and Sol Laniado met with the Eagles captain and the game officials at midfield for the coin toss.  MAY won, and deferred their choice to the second half, giving the Falcons the ball to start the game. 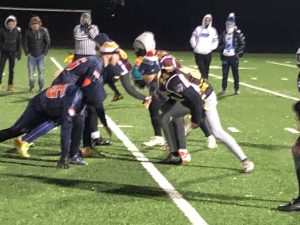 Flatbush looked to attack the Eagle defense early, but Laniado and his receivers were not on the same page.  As a result, the first two Flatbush possessions both ended up in interceptions.  Conversely, MAY scored on their first time on offense as the Flatbush defense was unsure of how best to defend against the Eagles attack.  From that point on, though, Assistant Coach Ralph Lati (running the sideline as with Head Coach Murray Tawil out of town on business) reset the backfield and the defense regained the form they had for most of the regular season, with linebacker Mo Goldman making a big stop in the open field to stall at least one of MAY’s drives.  On offense, Laniado began to move the ball, primarily with his feet, putting the Falcons in position to even the score.  He soon found Goldman, who managed to slip behind the Eagle defensive backs, but Goldman could not secure Laniado’s pass.  At the half, MAY held a 6-0 advantage. 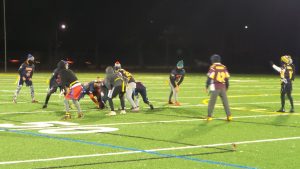 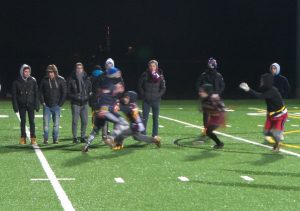 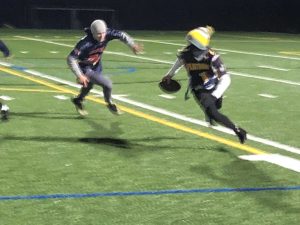 The Eagles started the second half with the ball, looking to add to their score right off the bat.  Flatbush would have none of that, with Sol Franco making a big play batting away a deep third down pass at the last moment to force the Eagles to punt.  Defensive End Joey Maswary followed suit with another big play on defense, recording a sack just in front of the end zone, to force a third and very long.  That third and long proved to be the turning point of the game.  With the Flatbush defense clamping down on the MAY quarterback, forcing him to scramble for his life deep in his own end zone, he pulled out some huge moves, turning a near safety into a near touchdown (the play was called dead at the spot of a foul at the Falcon 35 yard line).  It was a huge momentum swing, and it set up an eventual Eagle score.  With the conversion successfully completed, MAY now had a 13-0 lead. 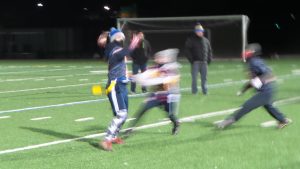 Flatbush had one last chance, and it looked like they would make the most of it.  Laniado found his passing touch and connected first with Franco and then with David Cohen.  The offense was now in rhythm, and the Eagle defense was on its heels.  With time running out, though, Flatbush was soon faced with fourth down, needing to get the ball safely to the 15 yard line to preserve possession and keep the drive – and the hopes of a comeback – alive.   It looked like the Falcons had devised the perfect play, with the offensive line giving Laniado just enough time.  He found Goldman, who got open on the sideline right at the yard to gain marker, but Goldman just could not secure the ball.  It bounced away, incomplete, ending the Falcons first foray into the Mesivta Football League. 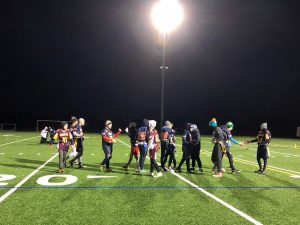 Junior Quarterback Sol Laniado was disappointed with the result, but was reflecting positively afterwards.  “We really improved over the course of the season, and I am very confident that we will be ready to challenge for the League championship next season!”