The Flatbush JV Football Team put its first win in the ledger on Sunday afternoon (2/25), and got a modicum of revenge, in defeating Mesivta Ateres Yaakov – the team that sent the Varsity Falcons home in the playoffs – by the score of 12-7 on the Lawrence HS Turf Field in Lawrence, NY.

With temperatures a bit milder that the season opener last week, the relative warmth was tempered by a constant mist mixed with intermittent rainfall.  With that as the backdrop, the Flatbush JV Football team took to the field for their second game of the season, looking to gather their first win.

The first half was a defensive battle, with neither team able to get the ball into the end zone.  Clearly, points would be at a premium on the afternoon.

The scoreless tie did not last long in the second half, though.  On their first drive of the second half, Sophomore Quarterback Alan Sassoon hit Sophomore Wideout Marty Elmekies for the first big play of the game, a 60-yard touchdown catch and run.  The conversion failed, but Flatbush had the early lead at 6-0 with 8 minutes remaining.

The MAY Eagles did not take long to answer the Falcons scoring strike.  And, the Falcons contributed to their own troubles, as the Eagles gained 50 yards on a pass interference call.  That set up a MAY scoring strike on the next play.  They completed a throw just across the goal line.  To add to Flatbush’s problems, the Eagles were successful on the ensuing point after.  the successful conversion was the difference in the game, putting MAY up 7-6 with 5 minutes remaining.

After a quick 3 and out for the Falcons, MAY had a long play to set up 1st and goal on the 10.  If the Eagles scored, it would virtually ice the game.  The Eagle QB dropped back and sent the ball arcing into the end zone.  with the game in the balance, Flatbush Freshman Defensive Back Isaac Soffer came up with the defensive play of the game.  Soffer reached out and pulled in the Eagle pass for a game saving interception!

Flatbush now had the ball back.  But, they still trailed and time was quickly running out.  Sassoon engineered a drive down the field.  But it soon bogged down 7 yards shy of the MAY goal line.  With 54 second left to play, Flatbush was at the Eagle 7 yard line, but it was now third down.  Sassoon did not panic.  He took the snap, dropped back.  He stepped up and fired a bullet pass to Ikey Tawil, but he was very close to the end line.  No worries; Tawil dragged his toes, staying just in bounds.  the officials hands darted upward signalling the go-ahead touchdown!  Again, Flatbush failed on the conversion, but they again had the lead, this time by a score of 12-7.

With just 48 seconds left, MAY saw their first throw from scrimmage intercepted by Sophomore Isaac Sutton. From there, Flatbush was able to use up some clock, but they could not exhaust it completely.   MAY had one final play, one chance at a Hail Mary. The QB was pressured on a Falcon blitz, and he could not even get off the throw.  Time expired, and the Head Coach Murray Tawil’s JV Boys had their first-ever win, by a score of 12-7. 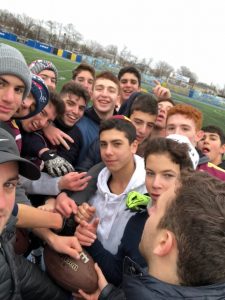 NEST NOTES:  The JV Falcons evened their record at 1-1 on the season with the win.  they will be back in action next Sunday when they take on the HAFTR Hawks back at Lawrence HS.  Game time is set for 2:30 PM.