The Flatbush Boys and Girls Varsity teams kicked off their 2018 seasons on Monday night (2/26) with a doubleheader that saw both games end when the winning team reached a 7-goal margin, as the Varsity Boys’ rally fell short in a loss to the Ramaz Rams while the Varsity Girls decisioned the HAFTR Hawks in similar fashion at the Falcons nest in Brooklyn, NY.

The Varsity Boys opening the night’s soccer games, and the Falcons nearly had an early advantage right off the opening play.  Ohad Reichman has a blast that just went wide,  and goalie Sammy Burekhovich came up with a great save off an indirect kick to keep the game scoreless. However, it was Ramaz that got on the board first at the 9 minute mark, striking twice in under a minute for a quick 2-0 lead.  Brian Fuks got one back for the Falcons at 6:18.  But, Ramaz kept the pressure on.  The Rams scored two more times in the period. Flatbush had a number of good opportunities – one from rookie striker Meyer Beyda and a pair from Reichman – and they finally got the ball home when Reichman got behind the defense and drove home a one-timer. At the end of the first quarter, the Rams led 4-2. 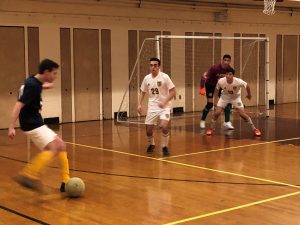 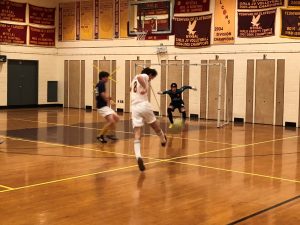 At the start of period two, Flatbush nearly scored off a great offensive set, but again it was Ramaz that put the next goals on the board. The Rams put up three quick ones in a less than two minute span.  Fuks got another one back, then Yaron Sternberg stuck from near mid court to make it a 7-4 game.  Ramaz scored again, then another rookie, Liel Edry, scored his first career goal as a Falcon to make it an 8-5 game.  Flatbush had some momentum, but the Rams were not fazed.  They squeaked another pair into the Falcons net, with over five minutes left in the half.  Ramaz would get one more in the final minute when the Falcon defense ended up out of position, and at the half, Ramaz led 11-5. 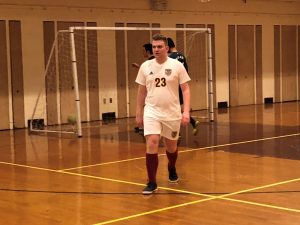 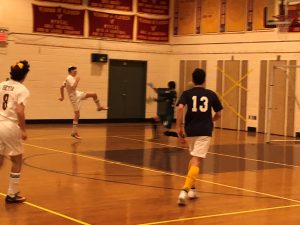 Looking to spark something, the coaches inserted Ricky Levy in the goal for Flatbush.  It was a good omen, as Albert Hamui scored his first varsity goal to close the gap to five goals. The Falcons defense was on form, and after a great team stop, Reichman came up with the next goal, a drive from just over the mid court line that scooted under the Ramaz goalie.  With just over five minutes left in the quarter, the deficit was down to 4. It was a great period for the Falcons. Levy pitched a shutout, and Flatbush closed to 11-7 with one quarter left to play. 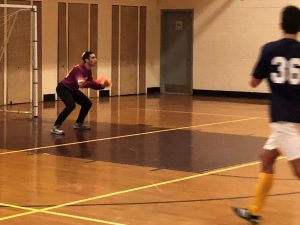 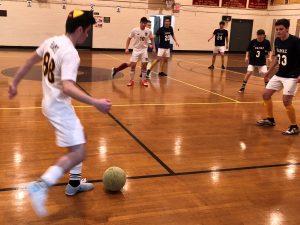 Levy made another save right at the outset of the period, but moments later, Ramaz finally solved him, putting the ball just out of his reach to take back one of the goals.  Hamui answered two minutes later, knocking an indirect kick off a Ram defender and into the goal.  Moments later, though, Ramaz had put two more scores on the board. The score was now 14-8. One more Ram goal and the game would be over.  That goal came shortly thereafter, and the game was in the books as a 15-8 win for the visitors. 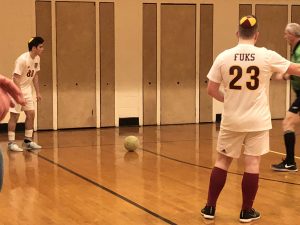 The Varsity Girls stepped out on to the court next, looking for a better start to their season that the boys had.  It took only two minutes for a Regina Saada to get things started in a positive way, giving Flatbush the early 1-0 lead.  Defensively, Rachel Shasho and Jacqueline Mann kept the crease fairly clear, and Goalkeeper Renee Gindi cleaned up the rest early in the opening quarter.  Brenda Tawil nearly drove the ball home a few times, and Raquel Keda had a great look, but neither got the ball past the Hawk goalie.  The next good chance belonged to HAFTR, but Gindi came up big to deny the Hawks.  Then, with 1:45 Mann got the next goal when her indirect kick was deflected by a HAFTR defender and into the Hawk goal.  The defense of Kelly Esses preserved the 2-0 lead as she cleared away a lose rebound from in front of the Falcon goal after a sprawling save from Gindi left the goalie out of position, and that was the score at the end of the first quarter of play. 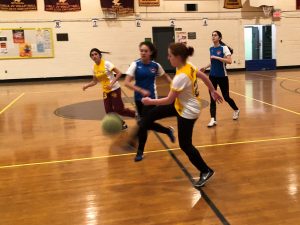 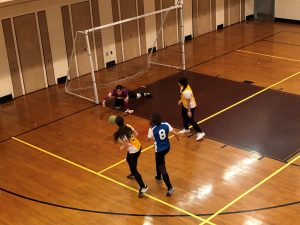 The Flatbush defense faltered at the start of period two, when a handball in the crease gave HAFTR a penalty shot, and they made it count, squeezing it just inside the post and past the outstretched hands of Gindi.  The Falcons nearly got the score back a few minutes later, but Tawil’s blast from 15 feet ricocheted off the crossbar. Flatbush carried the majority of the play in the period, but had nothing to show for it. That changed when with 2:12 left in the half Saada beat the HAFTR goalie for a second time, lifting Flatbush to a 3-1 lead.  With the period winding down, Saada was the beneficiary of a very friendly bounce, as a clearing pass glanced off her leg and past the keeper.  Flatbush would get one more, as with 8.0 on the clock rookie Ruthie Soffer got her first goal of her career. The late period explosion gave Flatbush a 5-1 lead at the half. 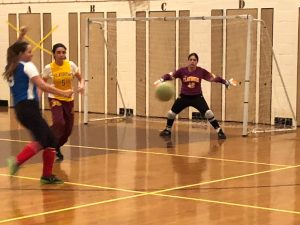 55 seconds in to the second half, the Falcons offensive tandem of Tawil and Esther Hidary finally got one in, as Tawil bounced a pass off the back wall that Hidary drove home, giving Flatbush a five goal lead. Tawil then got one of her own a few minutes later to extend the lead to 6.  With 4:30 left in the period, HAFTR took a handball penalty in the crease, like Flatbush did in the second quarter.  Unlike HAFTR, though, Flatbush’s shot was defended.  And two minutes later, HAFTR got back on the board as they floated a shot over the outstretched arms of Gindi.  The score was now 7-2 Flatbush.  That was where things stood at the end of the third quarter. 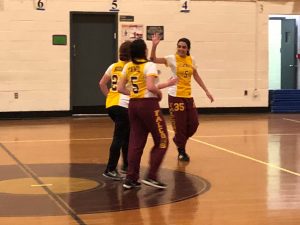 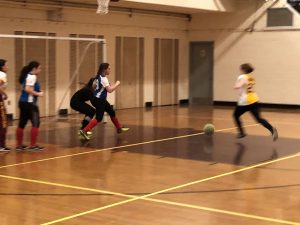 It took only two seconds for Flatbush to score in the fourth quarter. Putting the ball in play, Hidary tapped the ball and then Tawil blasted away.  The goalie never saw it!  Flatbush again had a 6-goal lead.  With 7:44 to play, Head Coach Edie Koslowe made a change in net, inserting Julie Saadia as Keeper and placing Gindi out on attack. At 4:30, Flatbush’s Saada netted the clincher for the 9-2 final score. 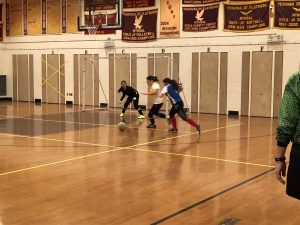 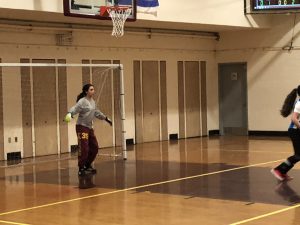 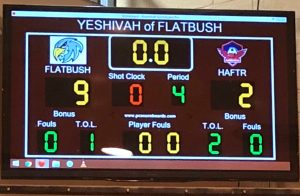 NEST NOTES:  The Varsity Boys will look to get that first win when they return to action on Wednesday, March 7, when they travel to MTA for an 8:00 pm contest with the Lions.

The Varsity Girls will try to build a winning streak when they host the Ramaz Rams a week later in Wendnesday, March 14.  Game time is set for  8:45 pm.