The Flatbush JV Boys Football Team put in a solid second half of play on Sunday afternoon (3/11) and defeated a tough Mesivta Pruzdor team by a score of 14-7, evening their record at 2-2 on the season at the Turf Field in Lawrence, NY. 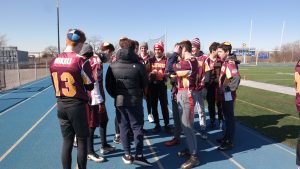 It was a cool and brisk day, and that might have had something to do with the slow start for both offenses Sunday afternoon.  The defenses were on form, but Pruzdor was able to put together a solid scoring drive.  Facing a 3rd down with Pruzdor on the Falcons 6 yard line, Sophomore Alex Mikhli left his feet with an acrobatic dive, grabbing the ball carrier’s flag and denying the Pruzdor runner the goal line.  On the ensuing possession, Flatbush Sophomore Quarterback put up a home run ball, looking to connect with a streaking Isaac Sutton behind the Pruzdor defense, but Sutton could not hold on to the ball.  MSP had one more chance with the ball to put points on the board before intermission, but Defensive back Soly Ishak came up with an interception.  At the half, the score was still and even 0-0. 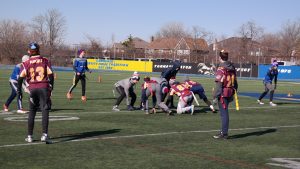 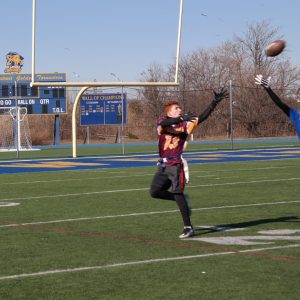 Things changed offensively in the second half.  And, the biggest factor to favor the Falcons was the change of direction.  Now, Flatbush would be throwing with the wind, and that made all the difference.  On the first Falcon possession of the half, Sassoon found Ikey Tawil, and the pair connected on a 50-yard touchdown – with a key block from Freddy Chazanoff opening up Tawil’s pathway to the end zone.  For the first time all season, Flatbush succeeded on the ensuing conversion, and the Falcons took a 7-0 lead.  MSP wasted no time getting back in the game, though.  With the ball in hand, Pruzdor drove right down the field.  the drive culminated with a screen pass that went for a score.  Their conversion was successful, and the game was a gain even, this time at 7-7. 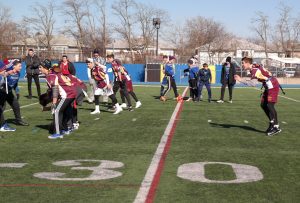 With the ball back in Flatbush’s hands, Sassoon coordinated another solid drive.  The big play came on a Sassoon completion to Marty Elmekies on a slant over the middle that the receiver turned into another Flatbush 50-yard gain.  Sasson went back to Elmekies on the next play with a screen pass. Elmekies pulled in the ball and headed up the sideline, lunging across the goal line for the go-ahead score!  Elemkies finished off the drive with a successful conversion, giving Flatbush a 14-7 lead.  But, Pruzdor was not ready to concede defeat.  With two minutes left on the game clock, MSP slowly and methodically made play after play, marching down the field using just about one minute of game clock.  But, the Pruzdor attack bogged down at the Faltbush 10 yard line.  Facing 4th down, the Pruzdor quarterback lofted the ball towards his receiver in the Flatbush end zone, but Ishak had a bead on it and made a beatiful recovery to deflect the pass away, causing it to land harmlessly on the turf, sealing the Flatbush victory! 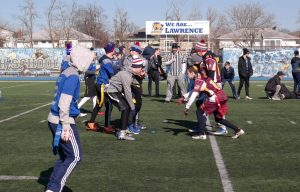 Final score: Flatbush 14, MSP 7
NEST NOTES:  The win evened the Boys JV Football Team’s record a 2-2 on the season, with two games left to play.  The next game is scheduled for Sunday, March 18, when the Falcons will take on DRS back on the Turf Field at Lawrence HS.  Game time is set for 1:15 pm.
(Photos courtesy of Joseph Setton)
Falcons Official Sponsor