The Flatbush Boys Varsity Indoor Soccer team picked up a hard-fought win over a traditionally tough opponent Monday night (3/12), getting two fourth period goals to turn a 1-point deficit into a 1-point lead, and defeating the SAR Sting by a score of 4-3 at the Falcons Nest in Brooklyn, NY. 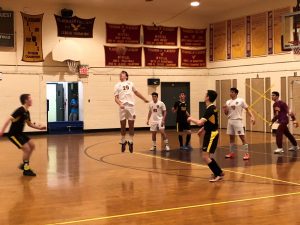 With Eddie Sabbagh in goal for the first time this season, the Falcon defense came out strong.  And with a little over three minutes left in the opening quarter, Yossi Ojalvo beat the Sting Keeper to give Flatbush a 1-0 lead. It looked like that would be the score at the end of the quarter, but with the clock running down, SAR got behind the Falcons defense and beat Sabbagh to even the scoring re with 6 seconds left in the quarter. 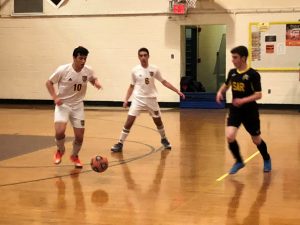 It was all about the defenses in the sec Nd quarter.  Sabbagh made a huge save, and the Flatbush defense, keyed by Ronnie Menashe, Ricky Levy and Yaron Sternberg kept the zone in front of Sabbagh the rest of the way.  Meanwhile, Flatbush came close to getting another goal, with Brian Fuks knocking one off the post, and Sternberg coming close on four separate shots, the last with just seconds left in the half.  But, neither team got one in the goal, and the half saw the teams still even at 1-1. 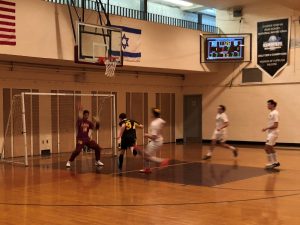 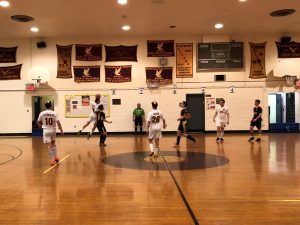 Flatbush brought the pressure to start, and then found controversy.  It looked like Ronnie Menashe poked home a Sternberg rebound, but the officials ruled they blew the whistle on an SAR handball in the crease before the shot, awarding Flatbush a penalty kick. Sternberg calmly blasted it home to take back the 1-goal lead.  Flatbush came close to doubling their lead, with great shots from Ohad Reichman and again from Sternberg, but could not convert.  But SAR did, when with 5:25 they got behind the defense and Sabbagh had no chance; 2-2 was now the score.  Flatbush again looked like they would get the ball home, but the Sting struck again, with a shot from the wing, to take their first lead of the game a minute and a half later. Flatbush kept the pressure on, but got nothing more to show for it in the quarter.  At the end of three, SAR now held he lead, 3-2. 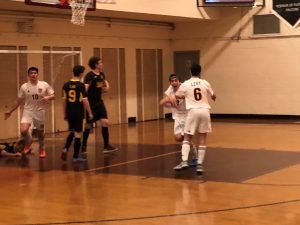 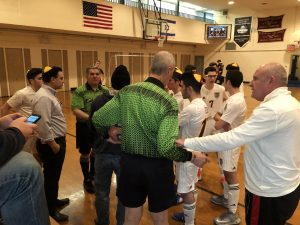 It took 2:17 for Reichman to finally solve the SAR keeper, evening the game with a well-placed touch. With 6 minutes left, Sternberg almost grabbed the lead, but he struck the post. The game then slowed with three consecutive injury stoppages.  Albert Hamui and Reichman each nearly headed the ball in the goal, but the Sting goalie made an extending arm save. At 3:38, SAR took another injury, and this time it left them a man down, playing three against Flatbush’s four field players.  50 seconds later, Sternberg squeezed the ball under the Sting keeper to take a 4-3 lead. 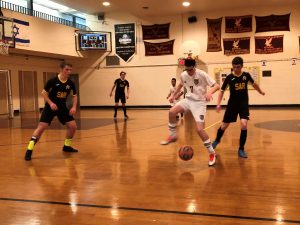 Could the Falcon defense make it stand up?   With 1:38 to play, SAR put their fourth back on the floor, and tried to hammer home the equalizer.  But, Sabbagh and the defense held, securing the 4-3 win over their short handed, but very game, opponents. 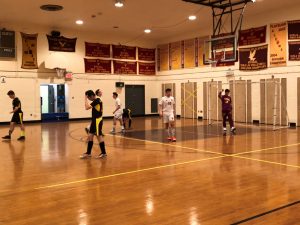 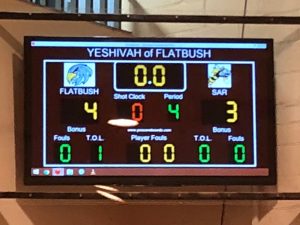