The Flatbush Boys JV Football team qualified for the playoffs on Sunday afternoon (3/25), with the defense staving off a late challenge from the YDE Thunder to hold on for the 20-19 win in the final game of the regular season on the Turf Field at Lawrence HS in Lawrence, NY. 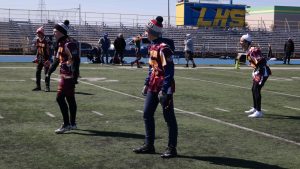 YDE opened the scoring, hitting on a long play and successfully converting the extra point for the early 7-0 lead.  But unlike the Falcons’ previous game, the Flatbush offense came to play.  On the next possession, Quarterback Alan Sassoon put the ball “on a dime’ to a streaking Marty Elmekies for a Falcon touchdown.  The conversion failed, though, and the Thunder kept the lead, 7-6.  YDE kept the pressure on, scoring again to extend their lead to 13-6 (this time, Flatbush defended the conversion.  With time running out in the half, Sassoon hit Ikey Tawil with a 50-yard strike, setting up the final play of the half.  With just 28 second remaining, Sassoon eluded the rush and scampered into the end zone for the second Flatbush score.  The Falcons looked to tie with the conversion, but failed again, and at the half, it was still YDE in the lead, 13-12. 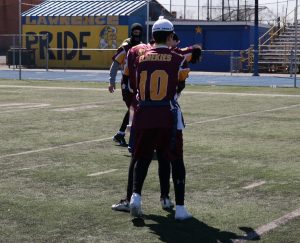 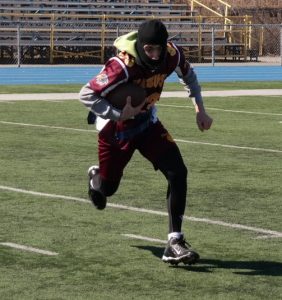 After halftime, it took only one play for Flatbush to flip the score, as Sassoon continued to spread the wealth, this time finding Isaac Sutton for a deep touchdown on the first play!
With the score now 18-13, Head Coach Murray Tawil elected to attempt a 2-point conversion, which if successful would give the Falcons a 7-point lead.  Sassoon dropped back, and with good protection, he was able to find Ronnie Novick, who pulled in the pass for the 2-points, and a 20-13 lead.  It would prove to be a most a crucial play. 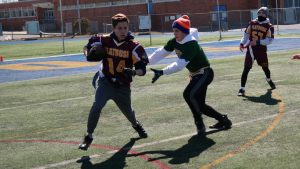 With Flatbush nursing the 7-point lead with 3 minutes to go, the YDE quarterback ran past the Falcon linemen for a 30-yard touchdown.  It was now up to the defense to protect the lead.  On the 1-point conversion, with the Thunder looking to tie the game, Ikey Tawil intercepted the pass,preserving a 1-point lead for Flatbush.  But, Flatbush could not add to the lead on their next possession, leaving YDE one last chance.  Up stepped offensive star Alan Sassoon, who came up with the decisive interception.  Game over!  Flatbush took the 20-19 win, securing a playoff birth in the inaugural season of the MFL JV Division. 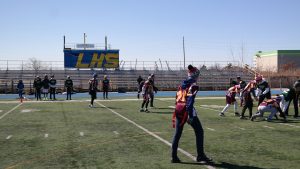 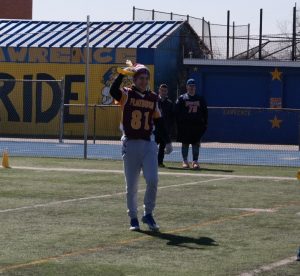 The win secured the Falcons a playoff spot.  The League has one more week of play, though the Falcons are inactive as it is their bye week.  At that point, the playoff opponents will be set.  The Playoffs will be on Sunday, April 22, at the Turf Field at Lawrence, HS on Long Island.  Opponents and game time are TBA. 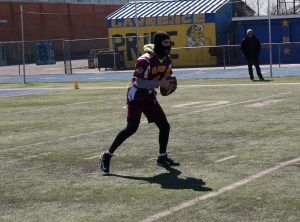