The Flatbush Boys JV Soccer Team battled traffic and home cooking, and though the team put on one if its best performances all season, they could not upset the top seed in the MYHSAL Playoffs, falling to the SAR Sting by a score of 15-8 at their indoor soccer gym in Riverdale, NY. 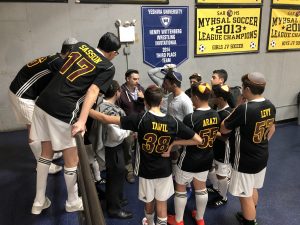 The team’s transportation was delayed almost an hour in arriving to the Brooklyn school, and as a result there was not much time for warm up once the Falcons arrived in Riverdale.  Nevertheless, the Falcons came ready to play, and from the start they had the Sting on their heels, with the frontcourt tandem of Michael Soussan and Josh Wicentowsky finding some great scoring chances in the opening minutes. But the soccer gym at SAR is perhaps the toughest of venues in the League for visiting teams, and the Sting are adept at responding to the court’s nuances.  The SAR keeper played the caroms expertly, denying the Falcon attackers.  And, SAR soon was on the board first.  At 1-0, Flatbush keeper David Lindner came up with a fancy acrobatic save.  Moments later, he came up with and even more impressive one, albeit with fantastic assistance from Defender Nathan Sidaoui who helped stop the ball just before crossing the goal line. But, SAR played the court well, and soon held a 3-0.  Flatbush finally broke through then, with Wicentowsky scooting the ball past the SAR goalie.  SAR got three more goals before end of 1st quarter, and were in control, 6-1. 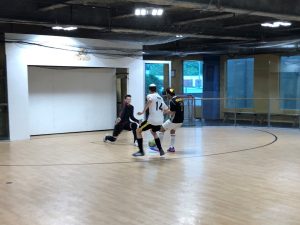 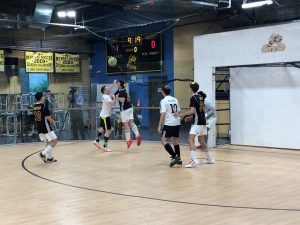 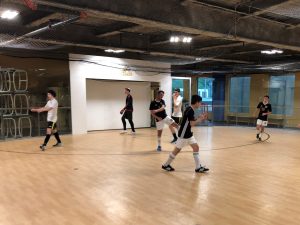 Flatbush refocused during the period break, and got one back just 25 seconds in, again off the foot of Wicentowsky, with solid pressure in the Sting zone.  Soussan almost got another one soon after, but it was disallowed as it hit the netting above the Sting goal first.  Lindner upped his game, and made some big saves. But, SAR managed to get isolation and put up another 6 goals in the period.  At the half, SAR led 12-2. 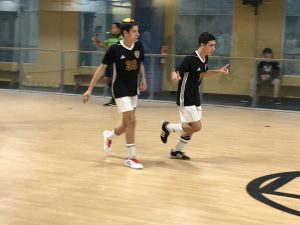 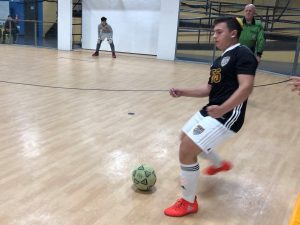 Thinks looked bleak for the Falcons, but Coaches Yoni Skolnick and Eli Amzalag kept the boys spirits up, focusing on staying with the game plan and working to get one goal back at a time.  After a pretty pass two minutes in led to another SAR goal, offensive pressure from Wicentowsky and reserve Sonny Natkin left a loose ball in front of the crease that Soussan blasted home for the Falcons third goal.  After SAR went up 14-3, Flatbush got three more; a pair from Wicentowsky sandwiched around another Soussan blast off a rebound.  the hosts were getting a little concerned, and with 4:30 to play, SAR put its top players back out on the floor to finish the quarter.  Flatbush had one aim at this point – to force a fourth quarter of play.  Flatbush kept coming, chipping away at the lead. 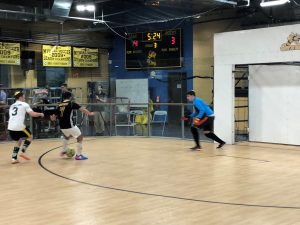 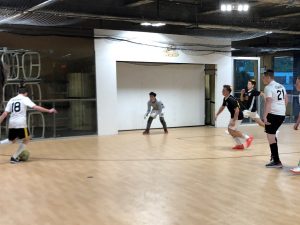 And, Lindner stood tall, making big save after big save down the stretch.  With under a minute to play, Wicentowsky knocked home another goal, making it a 15-7 game.  Flatbush needed two more goals to get the deficit down to 6, and force the game to go into the fourth quarter.  With under  a minute to play, they had their chance, but Soussan was just off balance enough to not be able to get a solid foot on the ball.  Lindner continued to defend the goal, giving Flatbush a chance. With seconds left on the clock, Wicentowsky struck one more time, making it a seven goal game.  But, only four seconds remained.  SAR kicked the in-bounding ball away, the buzzer sounded, and the Falcons season was over. SAR advanced by virtue of a 15-8 win over the Falcons. 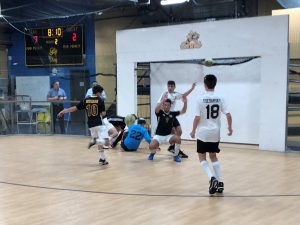 Afterwards, the Falcon coaches had nothing but praise for the effort and poise of their young players.  “We played the right way,” said Coach Skolnick.  “The boys played hard from start to finish, and they played with honor and respect- for their opponents, the officials and themselves.” “We could not be prouder,” added Coach Amzalag. 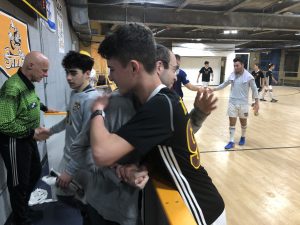