The Flatbush JV Boys Basketball Team put their first tally in the win column Thursday night (11/8) behind dominant play from the team’s big men, defeating the HANC Hurricanes 71-51, right after the Varsity Boys completed a scrimmage game with nearby Packer Collegiate, a contest purposed to get the team back in playing mode after a few days off enjoying the fruits of their Tier II Cooper win, using the opportunity to get back in the groove and get the entire roster game experience at the Falcons Nest in Brooklyn, NY.

The Varsity opened the night’s action with an early evening tip against the Prep School opponent from crosstown Brooklyn. 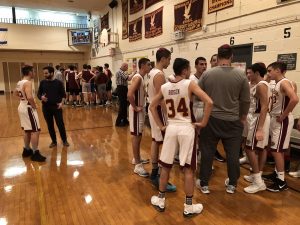 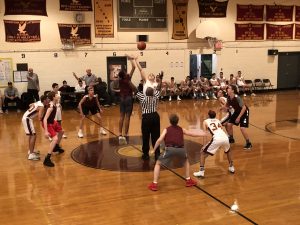 After trading baskets on the open possessions (Flatbush’s came on a strong power move from Center Jack Rosow), Packer took a 6-2 lead by converting Falcon turnovers into lay ups.  Isaac Rosen drew a foul on a three, and closed the gap toto 6-4. A David Dweck put-back closed Flatbush to within one with 2:30 left in the opening quarter.  Then Packer found the outside touch late, hitting two threes and a two to extend to a 16-8 lead at the end of the first quarter.

To start the second quarter, Guard Joe Kattan got Flatbush going on a cut to the basket, freed up with a pass from Alan Sassoon.  The Falcon defense then tightened up, with fantastic pressure from Kal Abed and Isaac Sutton, and a big block by a recently reinserted Rosow. When Abe Chetrit came up with a steal, he got the ball to Abed who found Rosow at the other end, and when he put back his own miss, Flatbush had cut the lead to 16-14. Moments later, after Rosow snagged away a Pelican in-bounds pass, a Sassoon transition hoop pulled the Falcons even at 18-18 with a minute to play in the half.  Flatbush scored on the final possession of the half when Eddie Lincer fired a bullet pass to Noah Sedaka under the hoop who dropped in the ball to re-tie the game. At the half. The teams were all even at 20-20.

The second half was clearly a different story, as Packer spent the half time regrouping, and they came out with guns blazing. Midway through the third quarter, they had allowed Flatbush only one lone basket by Lincer, while scoring 24 points of their own.  A Kal Abed three got the deficit back under 20.  Two possessions later, though, the lead was back out beyond that mark. And though Mo Goldman turned in a quality effort on defense and Eli Cohen came up with a nice tip inside for two down the stretch, the score stood 50-29 in favor of the Pelicans when the clock read 0.00. 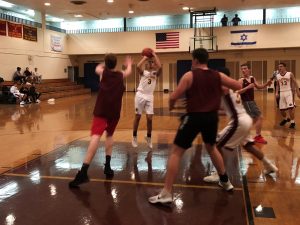 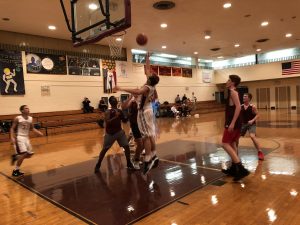 But, this game was not about the scoreboard, it was about the learning opportunities; and Head Coach Michael Gurock took full advantage of the scrimmage to see his full roster competing in a real game setting. “This was all about the process for us.  I wanted our guys to get back into competition mode, with big League games coming up, and I wanted to see everyone on the roster contribute tonight, which they did.”

The JV would soon tip later in the night, once their Long Island foes arrived.  When they finally got the game underway, Flatbush grabbed the early lead.  Amid cheers of “Let’s Go, Flatbush”  Morris Dweck hit a three to stake the Falcons with the game’s first points. The defense was active, with Shabot and Laham harassing the Hurricane guards, Sammy Levy altering and blocking shots, and Judah Regev hauling in big boards. When Levy finished a drive, Flatbush held a 8-7 lead with 2:15 left in the opening quarter. But the Falcons were collecting fouls at an alarming rate, and Teddy Hara and Levy were soon on the bench with a pair of fouls apiece.  Reserve Abie Saada was inserted into the game by Head Coach Gus Kennedy and he rewarded the move as he hit on a high-arcing three.  At the end of one  quarter, Flatbush was up 11-9. 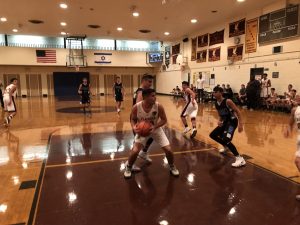 HANC quickly took the lead on a three, but a strong offensive board by David Ronen, who fed Regev to the hoop, set up a pair of free throws from the strong forward who was fouled going up.  13-12 Falcons with two minutes gone in the quarter.  Then it was Yigal Laham’s turn to shine. First he hit a three that brought cheers from the crowd, then he finished a give and go with Regev that brought them out of their seats! In moments, Flatbush had a 6-point lead.  Inside buckets from a driving Regev and a posting Ronen extended the lead to nine. A Morris Chaaya three answered one from HANC to preserve the 9-point cushion.  But still, Flatbush was collecting fouls. Soon Regev was sent to the bench and the Hurricanes paraded to the line to cut into the deficit.  Nevertheless, the Flatbush reserves had come up big in the opening half, and the Falcons took a 31-24 lead into the locker room. 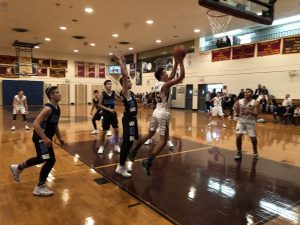 Less than a minute in to the second half, Hara pulled in a huge offensive board and put it back in for an 11-point Falcon lead, 35-24.  Defensively, Levy was a beast inside, ringing up block after block.  But, he was under the watchful eyes of the officials, and soon picked up foul number 3.  Coach Kennedy again looked to Regev, and he responded, getting loose for an in-bounds pass from Laham for an easy lay in and a 39-27 Flatbush lead with 4:30 left in the third quarter.  Two minutes later, Hara was the man inside, powering up a board then converting the traditional three point play for a 43-27 lead. But Flatbush got a little too sloppy on defense, and HANC took advantage, scoring from the line to close the gap to 11. The Hurricanes then hit a banker to get to single digits. At the end of the third quarter, Flatbush’s lead was down to 47-38.

Missed free throws by Flatbush coupled with Hurricane makes soon made it a 6-point game with just under 7 minutes to play.  An Irwin Azar deuce stopped the bleeding, but HANC stayed close.  Flatbush got back some breathing room with Regev hitting for a pair inside, then hitting Shabot for a breakaway lay up.  The bench was chanting, “Guard-i-an! Guard-i-an!” in support of their self-appointed bench captain’s efforts.  Flatbush was back in control 58-46 with 3:40 to play. Regev was living large inside, cleaning up on inside lay ins, soon extending the Falcon lead to 67-51.  With the game winding down, Coach Kennedy made sure the rest of his rookies could join in the fun.  Michael Flaster has a defensive stop and rebound, and Steven Chetrit hit an acrobatic drive in the final moments to seal the victory for the home team. Flatbush was victorious, 71-51.