The Flatbush JV Boys Basketball Team came back from a double digit deficit on Sunday afternoon (11/18), closing to within one basket, but could not reclaim the lead and fell to perennial power DRS by a final score of 40-38 at the Falcons Nest in Brooklyn, NY. 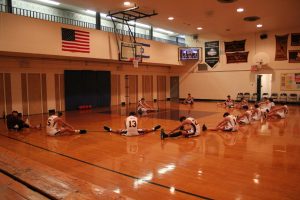 It looked like the Flatbush JV’s would be in good shape this afternoon.  The Falcons spotted the Wildcats a 4-0 lead and then pulled even on quality interior passing that led to a Teddy Hara lay up followed immediately by a turnover fast break that culminated in a Nathan Shabot basket. Then, Morris Dweck gave the Falcons their first lead of the game at 7-6 on a swish from three. Fouls sent Hara to the bench, but Sammy Levy had the touch inside to keep the cushion.  A buzzer beating runner from Yigal Laham gave Flatbush a 13-10 lead at the end of the first quarter. 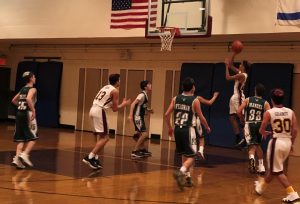 Flatbush soon built an 18-14 lead on a Judah Regev basket nearly midway through the second quarter, and the Falcons looked to be on the verge of pulling away. But with a chance to bring down the hammer on the Wildcats, the Falcons could not get the ball to drop on good looks from inside and outside.  DRS closed the gap on a three, then moved in front as Flatbush got sloppy with the ball, combining easy misses, turnovers and poor shot selection to allow DRS to stay close, and eventually swing the lead in their favor.  At the half, the score stood 20-18 in favor of DRS.

Flatbush played good defense to start the second half, but the offense was out of rhythm.  There was a lack of patience, an inability to get shots to fall from the field and from the line (Shabot was 1-4 from the free throw line) and added to that a few turnovers were part of the mix.  Meanwhile, DRS was getting some shots to fall, and almost midway through the third quarter, the Wildcats had moved out to a 28-19 lead.  Nearly five minutes had elapsed in the second half before Morris Chaaya got a three ball to fall, cutting the deficit to 4 points.  But the Wildcats responded, and by the time the quarter ended, the lead was back out to 9, with DRS in front 33-24. 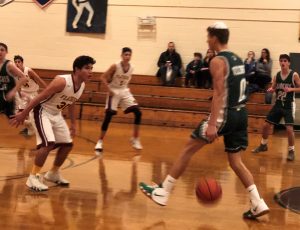 But, in true Falcons form, Flatbush was not ceding this contest.  Irwin Azar drilled a deep deuce to open the scoring in the final stanza.  And, the defense tightened up, making it increasingly difficult for the Wildcats to score.  DRS eventually answered Azar’s bucket with a three-ball to extend the lead to 10 points, but minutes later, Morris Dweck hit one of his own, and the score stood 36-29 with the Falcons closing hard.  After another DRS basket, Azar was fouled shooting a three.  He converted all three shots from the line, and it was now a 6-point ball game.  Flatbush was running out of time, but not out of will.  The defense was in denial mode, while the offense continued to work hard.  Hara hit one of two from the free throw line, but Levy was there for the rebound, and when he hit a baseline jumper, Flatbush had the lead down to three at 39-36.  After another defensive stop, Shabot found Hara under the basket.  Hara gave an up fake, then deftly dropped in the bank shot from in close – the difference was down to one point, with DRS clinging to a slim 39-38 lead.  Putting the Wildcats on the line, Flatbush got what it needed as they missed the front end of the one-and-one.  the clock was winding down, and the Falcons had the ball with a chance to take the lead!  But, the Falcons could not capitalize, missing on an open look from three.  They put DRS back on the line, but there was not much more than a second left to play, and this time they hit on one of the two freebies to extend the lead to 40-38.   Flatbush looked to loft a prayer, but the in bounds pass hit the ceiling.  The valiant come back fell short, and DRS escaped the Nest with the two-point win.

Afterwards, Coach Kennedy was very reflective.  “This was a frustrating loss, because we played great defense in the fourth quarter and we had a number of opportunities to take the lead and we just did not get the big shots to drop.   It was also our own fault because we made too many mistakes on offense in the first three quarters, just too many turnovers.  But on the positive side, we fell behind one of the top JV teams on our league and came back on them; we know we can play with anyone in our League.  I feel really good about our prospects for the rest of the season!”