The Flatbush Boys Varsity Flag Football Team extended its in-season winning streak to three games, taking home a hard-earned come-from-behind win in a game marred by penalties as they defeated the DRS Wildcats by a score of 18-6 at the Lawrence HS turf field in Lawrence, NY. 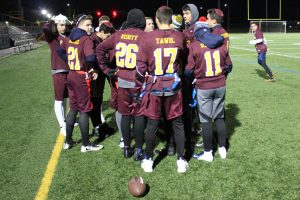 The game started out as a defensive battle, with neither squad’s offense able to sustain any kind of attack.  At the half, the score stood 0-0, but Flatbush lost one of its key players after sustaining a minor shoulder injury  while also drawing a questionable penalty.

The second half saw all that change right from the opening DRS drive.  With the Wildcats moving the ball, it appeared that Flatbush came up with a stop when Abie Soussan hauled in a one-handed interception, which he managed to do with the receiver pulling on his jersey.  But, that was not how the officials saw it.  They ruled that the pass interference was on Soussan, and awarded the ball to the Wildcats.  Shortly thereafter, DRS went in for the opening score.  The conversion attempt was denied by the Falcons, but the Wildcats had the lead, 6-0.

Flatbush saw it as a wake-up call, and on the ensuing possession, Quarterback Sol Laniado engineered a game-tying drive, capped by a scoring sprint from Laniado himself.  The conversion also failed, and the game was now knotted at 6 points apiece. 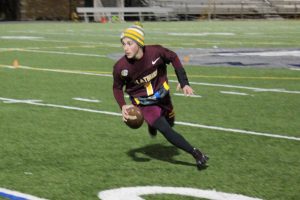 The Falcon defense was primed now, and for the second straight series of plays, came up with a takeaway – only this time it stood.  Ikey Tawil secured the errant Wildcats pass, handing the ball back to his offense.  Laniado steered the Falcons to a second score, this time connecting on a touchdown pass to favorite target Ezra Dweck.  Flatbush had its first lead of the day at 12-6. 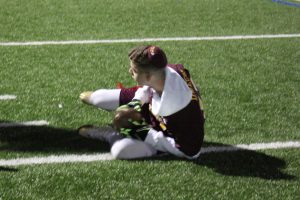 On the next possession for DRS, Flatbush cornerback Alex Mikhli was flagged for a flagrant hit out of bounds. That sparked both teams to lose a modicum of control.  Nevertheless, Flatbush’s defense stood tall and kept the Wildcats out of the end zone.

With the ball back and just 35 seconds to play, it was 4th and goal for the Falcons.  Laniado came up with a big connection, again finding Dweck for a scoring strike in the end zone.  With a two-score lead, the officials ruled that the deficit was insurmountable based upon the expiring clock, and game was called.

Flatbush left Lawrence with the all-important win, keeping the Falcons alive for one of the few coveted playoff positions. 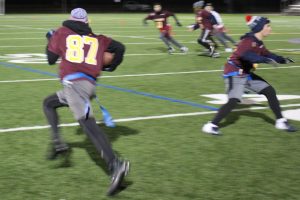 NEST NOTES:  The Falcons will have a quick turn around, with a Brooklyn doubleheader on tap for Wednesday night, as they will take on YDE at 7:15 pm followed by a contest with Shaare Torah right afterwards at 8:15 pm.  Both games will be played on the turf field at the Aviator Sports Complex in Brooklyn, NY.