The Flatbush 7th Grade Girls Basketball team started the 2018-19 season in mid-season form, defeating Silverstein in the opener by 26 points and following that up with a nail-biting win on Thursday night (11/29) over the North Shore Stars by a score of 35-34 at the Flatbush Elementary School Gym in Brooklyn, NY. 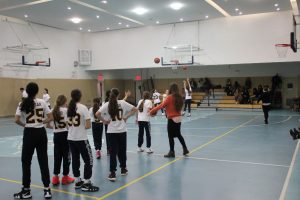 Head Coach Sylvia Franco saw her new crop of 7th Graders take their first test of the season on Tuesday evening (11/27), and her girls passed with flying colors.  It was a slow start, as the Sharks from Silverstein scored the fist two baskets of the game for a 4-0 lead.  It was a “wake up” for the Falcons, and the hosts dominated play for the remainder of the game.  Allie Abraham paced the defense, pressuring the ball from end to end.  It set the tone for her teammates, and they gave up only 6 more points the rest of the way.  Meanwhile, Flatbush found a groove offensively, and started piling up points.  Led by Jacqueline Romano (11 points on the game), the Falcons soon built a 25-point cushion.  Coach Franco took advantage of the opportunity and made sure each one of her Falcons saw quality time on the court in active game situations.  When the clock hit 0.00, Flatbush had its first game in the win column, defeating Silverstein by a score of 36-10. 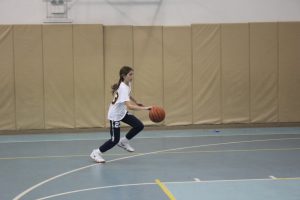 Thursday night’s game ultimately yielded the same result – a win for the Falcons – but the route to get there was very different. Flatbush grabbed the lead at the outset, utilizing the press to their advantage, with Emma Dayan leading the defensive assault.  Renee Franco spearheaded the offense (she led all scorers with 10 points for the game), and along with support from Romano, Flatbush had build an 8-point lead at the half. 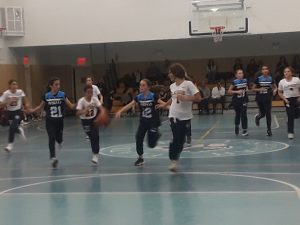 Flatbush kept the pressure on, and by the start of the fourth quarter the Falcons had extended the lead to 10.  In the final quarter of play, things slowly began to unravel for the host team.  The offense grew sloppy, and turnovers allowed North Shore to creep closer, so that with under a minute to play, the lead was down to 4.  the Stars scored to cut the lead to 2 points, and when they came up with a defensive stop with 30 seconds to play, North Shore called time out.  Coach Franco switched up the defense, changing from the zone they had been using to a man-to-man defense in the hopes of denying the Stars a good look at the basket, but North Shore made the shot.  With 10 seconds remaining on the clock, the game was all even!  Flatbush advanced the ball, and with time running out, the Stars committed a foul.  It was the team’s 10th, and it sent Lauren Shasho to the line to shoot two.  Shasho hit her first shot, putting Flatbush up by a single point.  She missed the second, and North Shore got the rebound, but the clock was down to 5 seconds, and it was moving.  Flatbush looked for one more defensive stop, and got it.  The buzzer sounded, and Flatbush was victorious, 35-34.  The High School Varsity Boys, on the sidelines awaiting the completion of the game for their practice to begin, rushed the court joining with the young Falcons in joyous celebration!  The 7th Grade Girls were now 2-0 for the week and for the season. 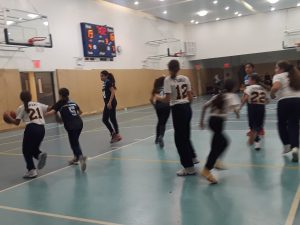 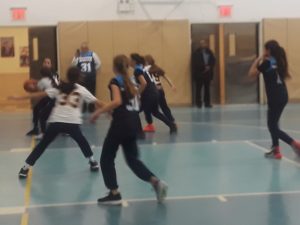 NEST NOTES:  The 7th Grade Girls will return to action on Tuesday, December 4, when they will again host the North Shore Stars in a rematch of Thursday night’s barn-burner.  Game time is set for 6:30 pm.