For the first time in many years, a different team took home the Hausdorff Championship on Sunday afternoon (12/2), as the Katz Storm came from behind to take the lead in the 3rd quarter, then held off a late push from the Flatbush Falcons to secure the 2018 Hausdorff Championship by a score of 47-38.  In the 3rd place game played earlier in the morning, the Cooper Macs defeated the Farber Fire, 41-33.

In the Third Place game, it started out as a defensive battle between Cooper and Farber, with pressure from the guard position coming from the backcourt leaders of both teams, that being Jacob Kleiman for the Fire and Moshe Davidovics for the Macs.  But, as the game progressed it came down to an inside vs. outside offensive philosophy, and the bigs of Cooper proved to much for the outside shooting of Farber.  Macs Head Coach Jason Redd directed his offense to go through big man Jason Schubert (who scored 12 points in the game), and he responded, leading the Mac attack with 12 points, alomst all from inside the lane.  Farber Head Coach Denarryl Rice’s boys played a perimeter offense, and nearly rode the strong shooting of Aaron Adler (who lead all scorers with 22 points) all the way back, closing a double digit deficit town to 8 points, but it was just not enough.  the Cooper Macs defeated the Farbeer Fire for the second time in two days to take 3rd Place in the Hausdorff Tournament by a final score of 41-33.

That set the stage for the Championship Game, a rematch between the host Flatbush Falcons and the Katz Storm.  Flatbush came in at 3-0, while Katz entered with a 2-1 record for the tournament, the lone loss coming at the hands of the Falacons the night before in a close game that saw the hosts pull away late for a 20-point win.  Would Flatbush be able to repeat the performance, or would the Storm make the necessary adjustments to create a different result?

From the outset, Storm Head Coach Rick Tims’s boys showed they had put the previous result in the rear view mirror, as the Storm jumped out to a 10-5 lead by the end of the first quarter, Flatbush’s offense struggled to find its rhythm, while Katz found consistency paced by 5 points from Akiva Kroll. Falcons Head Coach Gus Kennedy regrouped his Falcons at the quarter break, emphasizing defensive pressure, and they responded.  Turnovers by the Storm on three consecutive possessions got Flatbush right back into the game, and Morris Dweck capitalized for the Falcon offense, as his pair of free throws put Flatbush ahead at 11-10.  The Falcon defense was relentless, yielding only 4 points to the Storm in the second quarter.  A late three from Dweck made it a 4-point game at the half, with the score 18-14 in favor of Flatbush.

Katz knew that if they were to make a game of it, they would have to improve on the offensive end while continuing to keep the potent Flatbush offense in check.  The Storm understood this and the third quarter proved pivotal in setting the tone for the rest of the contest.  Katz came out of the intermission shooting – and hitting.  The three-ball allowed the Storm to climb right back in to the game, pulling even at 24-24.  The Falcons got a boost off the bench from Judah Regev who caused a pair of turnovers, and then converted a lay in to keep Flatbush even.  But Kroll hit another three, and then Yonatan Levy – who was in foul trouble most of the game – hit a pair of free throws after being fouled as the clock expired and Katz had taken control, outscoring Flatbush in the period by a 17-6 margin to take a 31-26 lead with one quarter of basketball left to play.  Katz could sense the feel of the game shift, and the pressure mounted on the Falcons to both close out on defense while trying to regain the offensive touch from the previous night.  The Falcons closed the deficit to two, and were threatening to pull even.  But, threes continued to be the friend of the Storm, and when reserve forward Jonathan Kogan hit a big shot from beyond the arc, it proved to be a turning point.  Flatbush had build some momentum and the Falcons were closing, but the shot allowed the Storm to re-establish its five-point cushion.  Flatbush was not done, though.  Guard Yigal Laham upped the pressure, grabbing a steal and taking it home for a lay-in with under three minutes to play.  And moments later, Dweck drilled another three to make it a 4-point game.  But, down the stretch, it was Katz that continued to make big shot after big shot, while Flatbush did not.  The Storm slowly extended the lead, closing out the Falcons for the upset, securing the 47-38 win to take the Hausdorff Championship trophy to South Florida, away from its Brooklyn home for the past 13 years.  Akiva Kroll and Yonatan Levy paced the Storm with 15 points each, while Morris Dweck led all Falcons with 14 points.

After the games were over, everyone moved to the Auxiliary Gym for the final event of Hausdorff 22018, the closing banquet and awards ceremony.  In addition to presenting awards to each team, including the presentation of the championship trophy to the captains of the Katz Storm, Tournament Director Mike Gelber announced the all-Hausdorff Tournament team.  The members were: Aaron Adler from the Farber Fire, Jason Schuber of the Cooper Macs, Flatbush Falcons Morris Dweck and Sammy Levy and Jonathan Levy of the Katz Storm.  the Tournament MVP was Katz Storm’s Max Froelich.

After a final d’var torah from Shabbaton Coordinator Rabbi Naftali Besser, Director Gelber thanked all who had a hand in making the weekend so successful, with a special recognition to all the YoF student members of the Hausdorff Tournament Commission; todah rabba to the Committee!  The final word, as always, was given to the head coaches, as each -in turn – shared their appreciation not just for the basketball competition, but for the opportunity presented by Hausdorff to bring young men from yeshivot across the country together, creating bonds they hope will last for years to come.  That is the true success of Hasudorff! 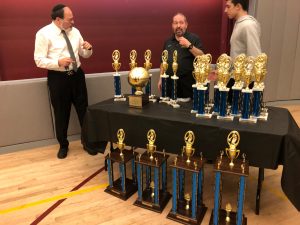 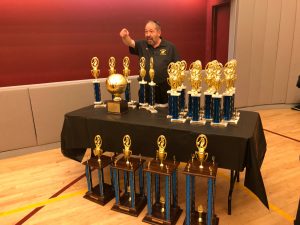 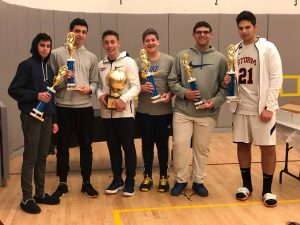