In a Chanukah holiday friendly contest at the Falcons Nest on Tuesday night (12/4), the Flatbush Boys Varsity Basketball team welcomed the Elitzur Rehovot Basketball Club, and while the Falcons came away with the victory on the court, both teams came away with a big win off the court as the boys began building a connection that hopefully will last for years to come. 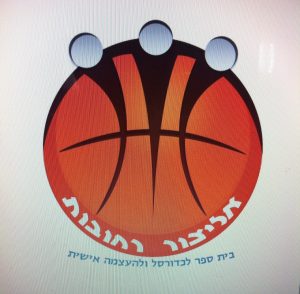 The players and coaches of the Elitzur Rehovot Basketball Club entered the Falcons Nest, eager with anticipation, but unsure of the welcome they might receive from the Flatbush hoopsters.  The Brooklynites made quick work of easing any fears the Israeli’s might have had, joining in spirited song as the teams opened the evening lighting the candles of the third night of Chanukah, executed by the captains of the respective teams. 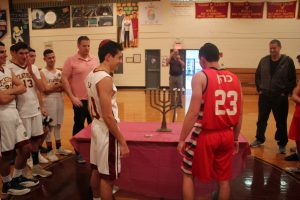 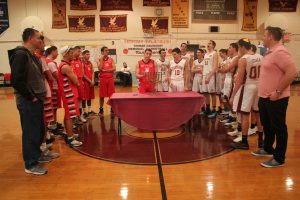 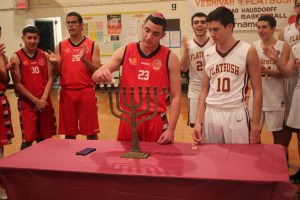 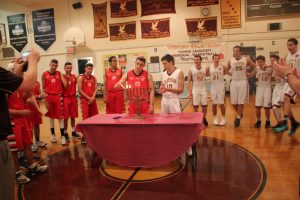 Immediately following candle lighting, the teams lined up on opposite sides of the court, facing each other for the playing of first the Star-Spangled Banner and then Hatikvah – which the players of both squads joining together in vocal song.  The players then met at mid-court, shook hands and the Falcons provided each Elitzur player with the gift of a Flatbush Falcons kippah. 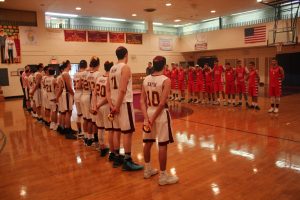 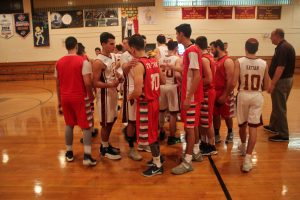 Tip-off soon followed, and Flatbush’s Eddie Lincer opened up the scoring with a lay in off a lead pass on the opening tip.  Rehovot answered right away with a back door cut to even the game.  Falcon Center Jack Rosow controlled the boards at both ends, and a tip in on an offensive rebound gave Flatbush an 8-2 lead.  Flatbush’s trademark pressure “D” led to a number of turnovers by Elitzur, and the Falcons took advantage.  By the end of the first quarter, Flatbush was leading Rehovot, 15-4. 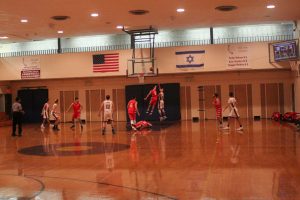 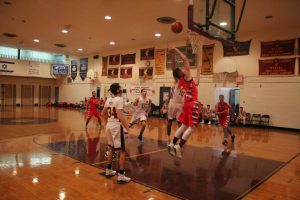 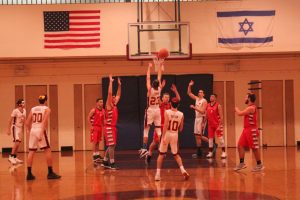 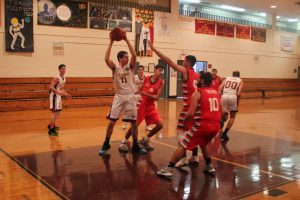 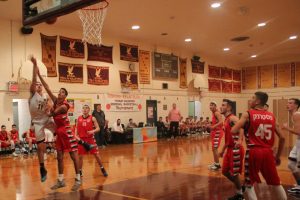 Rehovot scored on the opening possession of the second quarter, and Joe Kattan responded for Flatbush with a floater down the lane.  Elitzur then hit on a three, and the Falcons lead was down to 8. Flatbush looked to its big man three consecutive times, and Rosow responded, pushing the lead out to 23-9 with three minutes gone in the quarter.  Head Coach Michael Gurock then turned to his reserves to keep up the momentum.  The offense stalled, though, primarily due to poor free throw shooting.  Flatbush did make a play in the final seconds, as Isaac Rosen found Abe Chetrit slashing to the basket. At the half, Flatbush was in control, 26-14. 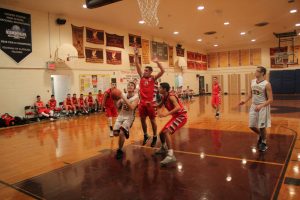 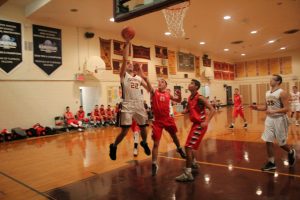 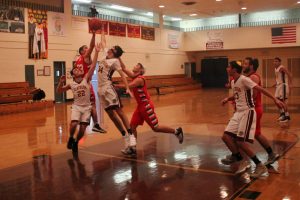 It took a while for Flatbush to get started in the second half, but after yielding a lay up on an in bounds play, Ricky Sasson came up with a steal then hit Mo Goldman with an outlet who fed David Dweck in the lane for an easy deuce.  Late in the quarter, Coach Gurock called for an old YU in-bounds play, and when the Falcons ran it to perfection – with Eli Cohen finishing after his teammates’ misdirection, Coach Gurock got the “thumbs up” from the Rehovot coaches (both former players of retired YU great Head Coach Johnny Halpert, who originated the play). At the end of the quarter, Flatbush’s lead was now 38-22. 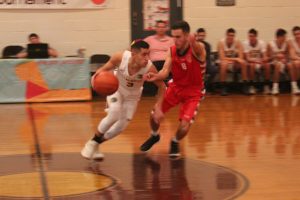 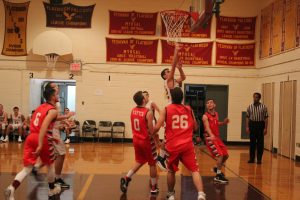 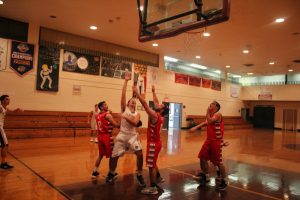 Isaac Sutton hit on a baseline fade to start the final quarter of play.  The offense then stalled, and Elitzur closed the gap a little. But the Falcons defense was still tough, giving up only 6 points in 6 minutes of 4th quarter play.  Goldman ended the scoring drought with a pair of free throws with 1:30 left to play. Elitzur would close the gap on a pair of three pointers, but the reserves made the lead stand up.  When the clock read 0.00, Flatbush had secured the 44-33 win. 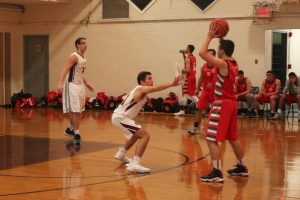 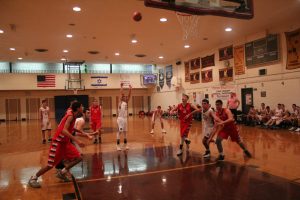 Afterwards, the real game got underway, as the Falcons and their Israeli guests joined together in the Old Student Lounge for a joint team meal and an opportunity to connect with each other.  With pizza in hand, the boys shared stories of school and daily life from different sides of the globe.  By the end of the meal, the boys were singing and jumping and having a generally good old time. One would never know that just a few hours ago, none of the boys had known each other! 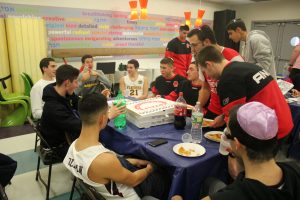 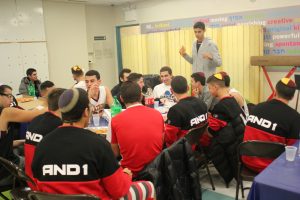 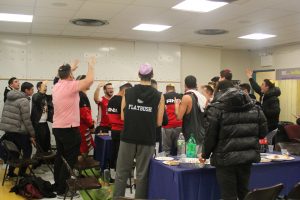 Will full bellies and tired legs, the Falcons escorted the Elitzur boys out of the HS and to the various homes that would host the visiting Israelis.  For the Israelis, they would see what Brooklyn home hospitality looks like, Yeshivah of Flatbush style, with all the boys set to reunite again in the morning for Shacharit t’filot at the High School before the Israelis would be off on the next leg of their New York Chanukah adventure.  But, “connecting” is what tonight was all about, and it was a fantastic sight to see.  It was surely no Chanukah miracle, but it was clearly a positive by product of the Chanukah holiday spirit. 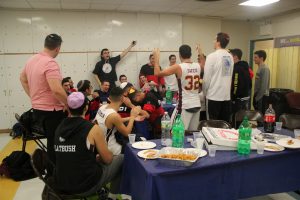 (The Flatbush Athletic Department wishes to extend a mabrouk and todah rabbah to the leadership of Elitzur Rehovot, Coaches Miko Danan and Yossy Gev, who organized their team tour of the New York Metropolitan region allowing for this opportunity for the Flatbush Falcons Boys Basketball program.) 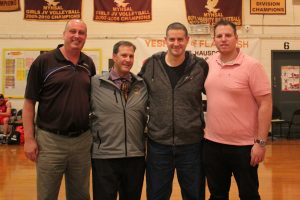