The Flatbush Falcons and Magen David Warriors faced off in a pair of boys athletics doubleheaders Wednesday night (12/5), and the schools swapped sweeps as the Falcons took both ends of a JV/Varsity Hockey doubleheader at Magen David’s Bay Parkway site while the Warriors returned the favor on the basketball court at MDY’s Elementary School on McDonald Avenue in four hotly contested games between the two powerhouse Brooklyn programs.

The JV’s opened the games at the respective sites.  Magen’s basketball team jumped out to the early lead, and maintained it throughout.  Flatbush got quality play as expected from Guard Morris Dweck, and Sammy Levy provided strength inside for the Falcons, but the Warriors proved to tough on the night, pulling away for a 55-43 win.

Meanwhile, the game at the MDY HS building was much closer.  the teams sized each other up for nearly half the opening period, when Flatbush recorded the first strike in the game as Jacob Kassin put a Gerry Sabbagh pass into the Warrior goal.  Joe Maymie doubled the Falcons lead a few minutes later, but MDY got on the board less than a minute after that, finally getting the puck by the constantly improving Ronnie Novick in the Falcons goal.  The period ended with Flatbush holding a 3-2 lead.  Magen pulled even at the start of the second period, but as the season has shown, the second period belongs to the Falcons, and Flatbush scored three unanswered goals to take command and head to the 2nd intermission with a 6-3 lead.  The Warriors were conceding nothing, though.  Over the next 8 minutes of play, the Magen defense toughened up, and their offense rung up three consecutive goals.  With 4:08 to play, it was now again a tie game.  Flatbush wasted no time ending the tie, though, as less than 20 seconds later Flatbush got goal number 7 from David Shalam.  Novick made it stand up, and the JV Falcons took the game, 7-6. 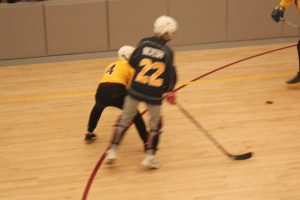 The Varsity Hockey Falcons fed off the momentum of the JV’s, and quickly established dominance on the court.  Over the course of the game’s three periods, Flatbush got four goals from Joe Shamosh, a pair of goals each from Michael Escava and Rafi Nemet and a single goal from Mikey Dayan en route to a 9-3 drubbing of the Hockey Warriors.  Head Coach Elliot Zakay was very pleased with the effort, and credited Senior Ezra Dweck with keying the Falcons dominance.  “Ezra facilitated over half the offense for us, assisting on more than half of the goals.  His energy was great and he was a real leader for us on the floor.” 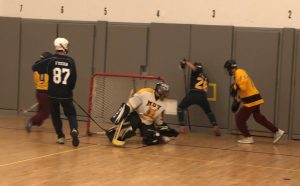 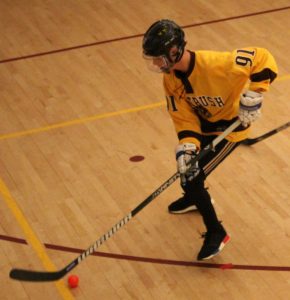 The final head-to-head contest was the most anticipated, as the Falcons Varsity Basketball team had this date earmarked on the calendar as soon as the schedule was released.  The Warriors came in as the pre-season favorite in the MYHSAL, and both teams earned success on the court side-by-side in Memphis where the Falcons and Warriors were Tier II and Tier I Champions respectively, but this would be the first – and only – head-to-head meeting of the two rivals during the regular season.  Flatbush Head Coach Michael Gurock had a game plan for his boys, and they executed it to perfection for the first three quarters of play.  It is well known that the Warriors like to run and prefer an up-and-down game.  Flatbush made a concerted effort to control the tempo, to slow down Magen and force them to work in the half-court set.  It was effective, as Flatbush’s Eddie Lincer hounded Magen’s top performer, Albert Nisiri, from the outset and the Warriors struggled to solve the Flatbush defense.  Meanwhile, Jack Rosow dominated the game inside, controlling the boards and scoring for Flatbush inside the lane. 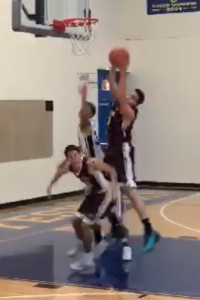 Flatbush held a 5-point lead at the half, keeping the high-powered Magen offense to under 20 points.  The Falcons brought a strong contingent of supporters to the road contest, and they were on their feet and vocal as their boys were in the lead.  Flatbush was even more effective in the third quarter, extending the lead to 7 and keeping it there when Nisiri missed on a lay up at the end of the quarter. 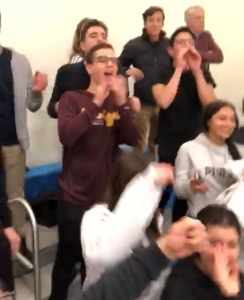 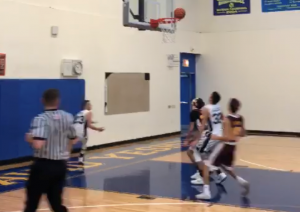 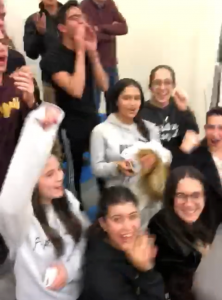 But, it was exhausting to build a lead relying on constant defensive pressure.  Fatigue began to become a factor.  And, when Rosow was issued a technical foul, it proved to be a turning point in the game.  Magen hit both free throws, and on the ensuing possession, Magen’s Sonny Natkin drained a shot for three from the corner from a nearly impossible angle and the lead was suddenly down to 2.  The momentum had swung 180 degrees.  Flatbush struggled to get quality shots down the stretch, and Magen pressed the advantage.  The Warriors gained some distance in the final minute, securing the win by a final score of 47-39.

It was a very tough loss, but Coach Gurock preferred to stress the positives with his Falcons.  “We played a PERFECT first three quarters and then in the 4th not having a true point guard hurt us as the pressure ramped up,” shared the Falcon Coach.  “That being said, I am really proud of the way the boys played tonight.  They showed that they can play with anyone when they execute the game plan.  Losing hurts, but I know this will serve us well as we will surely have more close games this season, and we know what we need to do to put them in the win column.”

And, should these two meet again in the postseason, the Falcons will surely bring an earned sense of confidence to such a meeting.