The Varsity Boys Hockey Team lifted their play and celebrated the return to the court of their Co-Captain for his first action of the season, defeating the HANC Hurricanes on Monday night (12/10) at the Aux Nest in Brooklyn, NY.

This game marked the season debut for Co-Captain and Senior Goaltender Sol Laniado.  There was no question that it was a major boost to the energy of the Falcon Varsity squad.  The question was, how much rust would their be in the veteran keeper being this was his first action of the season. 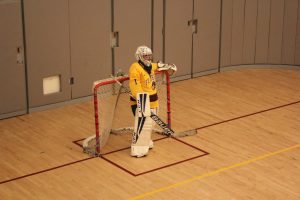 At the outset, the offense worked hard to make things easy for Laniado.  Early pressure was presented by Michael Escava and Ezra Dweck.  2nd line forwards Steven Sutton and Albert Saad matched the effort. Meanwhile, Laniado kept the Falcon goal clear with assistance in front from Michael Dayan, Nissim Mishaan and fellow Co-Captain Rafi Nemet.  But, there was still no score when Dweck was whistled for a penalty with just under 7 minutes to play in period one.  It was Laniado’s first real test, and he passed, with help in front from Dayan and Nemet, and great forechecking from Sutton.  Flatbush had a number of great scoring chances, but it was the Hurricanes who got on the board first when the defense could not clear the zone, and a weak side shot sneaked in behind Laniado with exactly two minutes to play in the period. Flatbush’s best chance came with 10 seconds left in the period, when Sutton was presented with a very hard angle but a wide open net. He could not put the ball home, and at the end of one, the score stood 1-0 HANC. 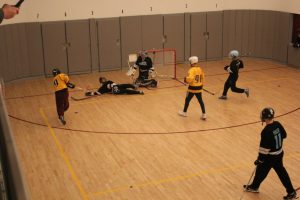 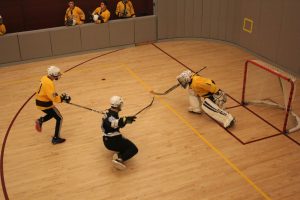 Flatbush had carried the play in the 1st Period, but has nothing to show for it, and that did not sit well with Head Coach Elliot Zakay and his troop.  Playing with an edge, Flatbush wasted little time, and in the first minutes of the second period the Falcons got the equalizer when Dweck centered a pass that Sutton drove home. And, just past the midway point, Flatbush took the lead on a flick of the wrist from Joe Shamosh that passed the Hurricanes keeper waist-high.  The Falcons were on the move, but Flatbush immediately followed that with back-to-back penalties. However, while on the second penalty kill Sutton stole the puck and registered a short-handed goal.  With 48 seconds left on the second penalty, though, HANC got it right back.  The teams played even the final two-plus minutes, and the teams headed into the second intermission with Flatbush ahead, 3-2. 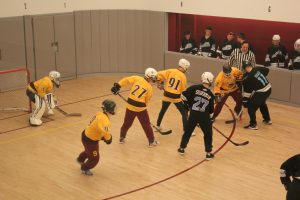 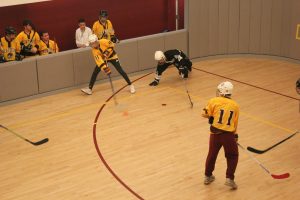 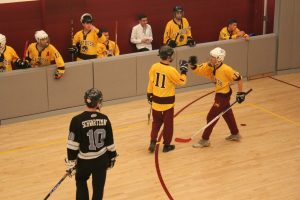 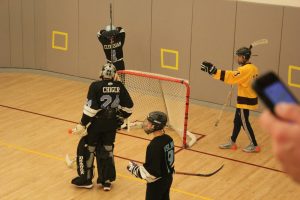 It did not take long for HANC to be back on the power play, but twenty seconds in, the Hurricanes joined the Falcons with a man in the box.  It was now 3-v-3 for a little over a minute.  The play was spirited, but neither team could take advantage. The next scoring chance came when Dweck got behind the defense with a little over 7 minutes to play.  He made a smooth move, but his lifted shot went over the crossbar. The teams soon changed ends, with Flatbush still clinging to the 1-goal lead.  The next chance belonged to HANC, but Laniado stoned the point blank blast.  Shortly thereafter, Dweck took a HANC misfire and drove it home to give Flatbush a two-goal lead with 1:58 to play.  Escava would add the icing on the cake with a goal just before time expired.  Laniado’s return was a success, as Flatbush closed out the Hurricanes, taking the game by a final score of 5-2. 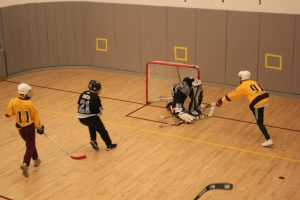 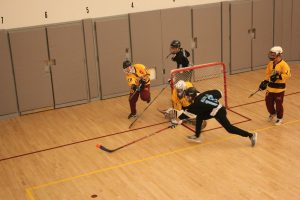 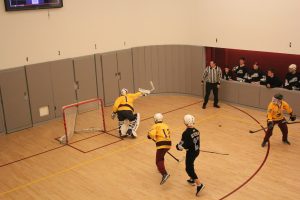 NEST NOTES:  The win was the third in a row for the Varsity Falcons, and put the team’s record at 6-4 with four games left to play.  The Falcons now sit in 3rd place in the Eastern Division of the MYHSAL, trailing DRS by 4 points and HAFTR by 2 points.  Flatbush can make a move to close the gap on Monday, December 17, when they travel to Cedarhurst, NY to take on the 2nd Place HAFTR Hawks.  It is the second game of a JV/Varsity Doubleheader, with an approximate start time of 9:15 pm.