The Flatbush MD Boys 6th and 8th Grade Basketball teams took back-to-back doubleheaders this week, defeating the Barkai Suns at the Sephardic Community Center on Monday (12/10) and following that up with a sweep of the Derech Hatorah Hurricanes on Thursday night (12/13) at the YoF Elementary School Gym in Brooklyn, NY. 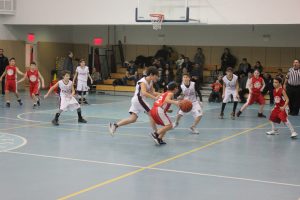 The week opened with a pair of games at the Sephardic Community Center between Flatbush and Barkai, with the 8th Graders opening the night’s action.  For the Falcons, it was their second game of the season, and they were tested in the early minutes of the game.  The Suns showed respect, but no fear, and forced the Falcons into a number of early errors on the offensive end.  At the end of the opening quarter, Flatbush held a very slim 11-7 lead.  Head Coach Mike Gelber refocused his boys at the quarter break, and the Falcons took flight from that point on.  Flatbush extended to as double-digit lead by halftime, and Coach Gelber soon employed the entire roster in the second half as the 8th Graders secured a 50-22 road win. 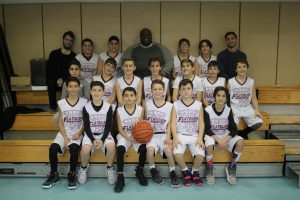 The 6th Grade Boys battled next, and it proved to be exactly that – a battle.  This was the Falcons first real test, having won their two previous games by double digits.  It would not be so easy with the Suns.  Barkai came ready to play, and the teams went toe-to-toe with each other.  The game was so close, the teams needed an extra period to decide a winner.  In the overtime, Head Coach Gus Kennedy’s boys came through, securing the low-scoring two-point victory, 23-21, to remain unbeaten and sweep the night’s doubleheader.

That set the stage for the home openers for both the 6th and 8th Grade Boys Falcons on Thursday night, a rematch of the season-opening double dip with Derech Hatorah.  The Flatbush Head Coaches filed the following reports:

“After enduring a three game road trip to start the season, Flatbush finally had their home opener against Yeshivah Derech Hataroah. Early on, Flatbush felt the jitters and started off slowly, falling behind, 6-2. After a slow start, due in large part to  Hurricane guard (Brand), Flatbush was grinding the rest of the 2nd quarter, and took a 3 point lead into halftime. Flatbush came out storming in the second half due in large part to the spark off the bench from David Cheney, Yonatan Bensimon, and Victor Shalom among others; the team generated 3 steals in the first two minutes to spark a 9-2 Falcon run. The Falcons took a stranglehold of the lead and never looked back. YDH had moments of strength, but the Falcons never let them back in the game. Ricky Haddad led the way with 12 points as the Falcons improved to 4-0 on the young season.  Next up, a date at the YoF Elementary School with HALB on Sunday, December 16th at 2:00 pm! 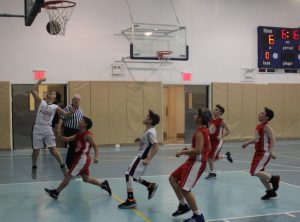 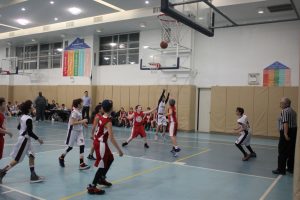 The 8th grade team is now 3 – o on the season after a dominating performance against Yeshiva Derech HaTorah, with the Falcons won by a final score of 66 – 47. The Falcons stormed out of the gate with a suffocating defense which led to numerous fast breaks and a 26 – 8 Flatbush lead at the end of the first quarter. The second unit came on in the second quarter and extended the lead at halftime to 36-11. The Falcons coasted from there to the finish line with the game never in doubt.  Sammy Benun led the Falcons in scoring with 19 points, followed by Danny Hanan with 11 points and Ben Fallack with 8 points and a number of fantastic assists.  The 8th Graders will look to stay undefeated when they return to action on Wednesday, December 19 in a home contest against the YDE Thunder.  Game time is set for 6:15 pm.
Falcons Official Sponsor