On the heels of an incredible and most improbable comeback, the Flatbush Varsity Boys Basketball team defeated the Rambam Ravens in overtime to complete a JV/Varsity Sweep of their Long Island opponents late on Thursday night (12/13) at a raucous Falcons Nest in Brooklyn, NY. 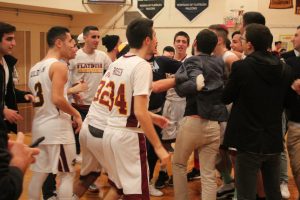 The evening started tamely enough as the Flatbush JV’s scored early and often in setting a dominant tone in the opener of the doubleheader with the Rambam Ravens.

Falcon Center Teddy Hara slashed to the basket on the opening possession and Guard Yigal  Laham followed on the next one with a swish, and Flatbush was off and running. 5 different Falcons scored on each of the first 5 possessions, and just two and a half minutes in, Flatbush held a 12-3 advantage. Later in the quarter, Nathan Shabot hit Sammy Levy on a break to add to the lead. At the end of the quarter, Flatbush was up, 20-5. 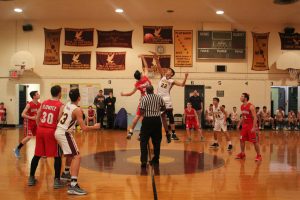 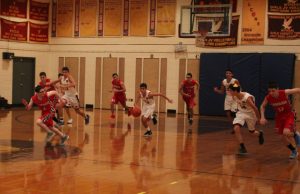 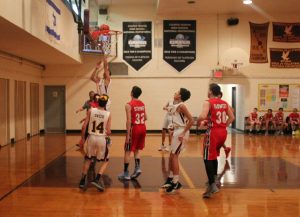 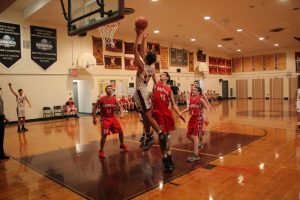 JV Assistant Coaches Michael Gurock and Joey Dayon went to the reserves early, looking to get some quality game experience for the JV reserves.  David Ronen responded, first with a lay in finish on a breakaway, then with an interior assist to Teddy Hara.  When Abie Saada came up with a backcourt steal and fast break finish, Flatbush had a 20-point lead.  Rambam closed the gap a bit, and at the half, the score stood 31-14 in favor of the Falcons. 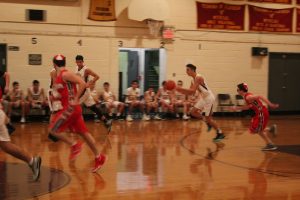 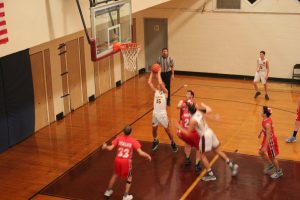 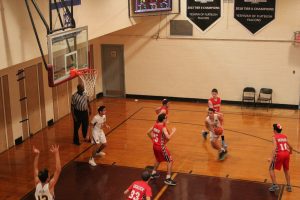 Saada had the hot hand in the second half, adding to the Flatbush total with hoops of his own along with a nice assist to Steven Chetrit. Flatbush won going away, closing out Rambam by a final score of 50-20. 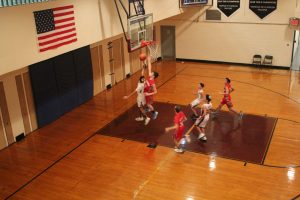 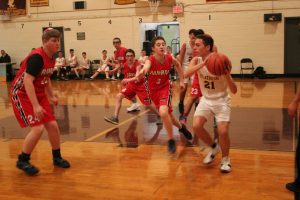 The Varsity squads then took the floor to begin warming up, and a nice sized crowd was on hand to see the older Falcons take on the Ravens, with vocal supporters in the stands for each squad. 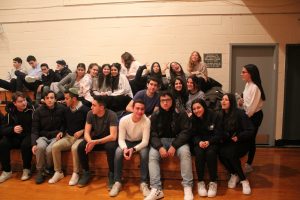 At the outset, it looked like it was about to be another long night for the Falcons as Rambam jumped out to the early lead.  And by the middle of the second quarter, the Ravens had built an 11-point cushion.  It was then that Flatbush got a wake up call.  Joe Kattan hit a floater, then followed it up with  a three to cut the lead down to 6; Noah Sedaka converted a traditional three-point play and Jack Rosow got the final two points of the half on a put back just before the buzzer to make it a three point game. At the half, Rambam held a 26-23 lead, but Flatbush held all the momentum. 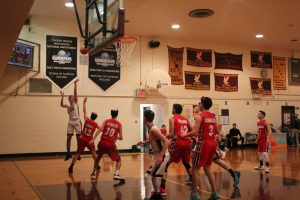 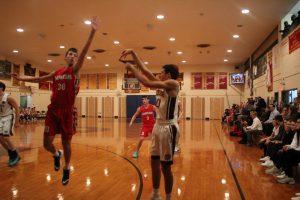 The Falcons flashed the defense to start the second half, with Kal Abed pulling in a steal and Rosow cleaning the glass.  And when Rosow hit on a jump hook a minute and a half in, Flatbush had taken the lead, 27-26.  But, the offense went cold, including two misses from the free throw line, and Rambam reclaimed the lead, 31-27 with 2:41 left in quarter number 3.  Rosow finally got Flatbush back on the board a minute later.  But, the Ravens had taken back control, and with one quarter to play, the score was 35-29 in favor of Rambam. 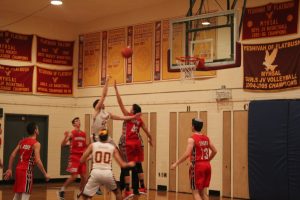 Flatbush got a stop on the first possession, but could not capitalize.  Abed got a three-ball to drop to cut the deficit to 5, but Rambam answered to make the score 39-32 with five minutes left in regulation.  Flatbush showed resilience, though, with Rosow tallying a score on another put back, then Eddie Lincer came away with a steal and Sedaka hit a jumper in the lane.  Rambam wanted timeout, and got it holding a 39-36 lead with 2:51 left on the clock.  The partisan crowd was on their feet cheering on their Falcons; “F, L, A, T – BUSH! BUSH! BUSH!”  Moments later Kattan hit a three, and it was a two point game with under a minute to play. Flatbush caused a turnover on pressure from Abed to get the ball back with 29 seconds.  Rosow made it count with an inside finish, drawing the foul. But, he missed the free  throw.  The game was tied, 41-41, and Rambam had the ball with 6.5 seconds to play.  Sedaka defended the corner, and Rosow pulled in the airball.  The teams were headed to overtime! 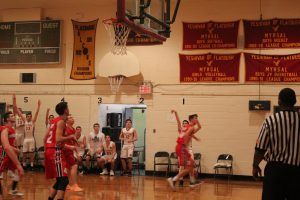 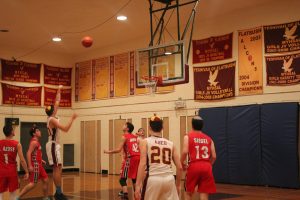 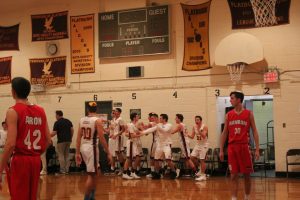 The overtime started just like the game in general.  Rambam controlled the tip, and got to the line where they hit both. Flatbush then got the ball and had a great look right at the rim, but missed and Rambam pushed the ball up for another hoop.  Again, Flatbush failed at the rim while the Ravens then added to their lead. Rosow finally got the ball to drop, but with half of the extra period gone Rambam held a 47-43 lead.  It looked bleak for the Falcons, but there was no quit in Coach Gurock’s boys.  Kattan smoothly rolled in a three, and it was a one point game. With intense pressure from Lincer and Abed, the defense got a stop, and the offense had the ball back, trailing by one. With the clock winding down, the ball found its way to Lincer in the corner. He, too, swished it home from beyond the arc.  There were 17.7 seconds left on the clock, and all of a sudden the Falcons were up, 49-47!  With the Ravens taking timeout, and the fans in the stands going bananas, Assistant Coach David Simhon gathered the 5 Falcons on the court and implored them to come up with one more big stop.  And, they did just that.  The guards pressured the Ravens backcourt tandem, forcing them to give up the ball.  With the clock winding down, the ball was now in the post.  The Raven center went up, but Rosow went up higher, and brought down a clean hammer on the Rambam attempt, blocking the ball out of bounds with 1.7 seconds to play.  The fans in the corner of the court were frenetic, and the defense fed off the energy.  Flatbush forced the in bounds into the corner, and the Raven attempt was high and way short. Time expired, with the Falcons left standing at the final buzzer, swarmed over by a sea of classmates, celebrating the most improbable of comebacks, defeating the Rambam Ravens by a final score of 49-47. 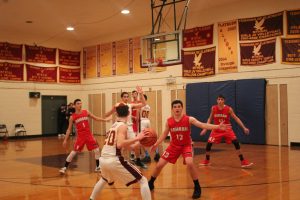 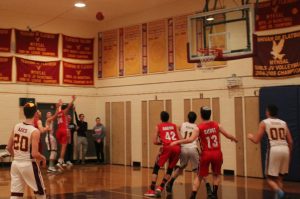 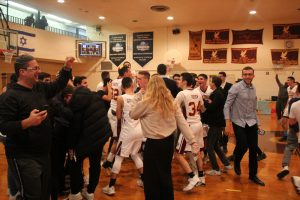 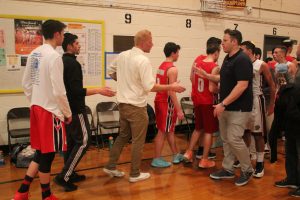 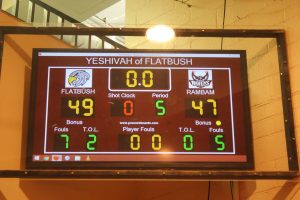 It was an exhausted and relieved Coach Gurock who emerged from the locker room with a pleased look on his face.  “Finally, we are on the winning end of a last-second shot,” exclaimed the winning coach.  We made some big shots during the comeback, but it was our defense that was the key. Our guards brought relentless pressure all night long, and both Rosow and Sedaka came up with the big rebounds and stops when it mattered most.  I am so proud of the effort and so pleased for all of the boys!”

NEST NOTES:  The JV and Varsity Boys will look to repeat the performance when they welcome the always dangerous YDE Thunder to the Falcons Nest on Monday, December 17.  The JV’s will get things started with a 7:00 pm tip off against the Brooklyn rivals.