The Flatbush Boys JV and Varsity Basketball teams played a pair of 4-point games with the crosstown rival YDE Thunder Monday night (12/17), with the JV’s withstanding a late run to hold on for the win while the Varsity nearly mounted a comeback of their own but fell short, splitting the doubleheader at the Falcons Nest in Brooklyn, NY.

YDE scored the first points of the game, but Flatbush ripped off the next 18 Behind shut down close out defense. YDE was kept off the scoreboard until 2:08.   Sammy Levy was on fire with 13 points in the quarter and after 1, Flatbush was in control 19-4. 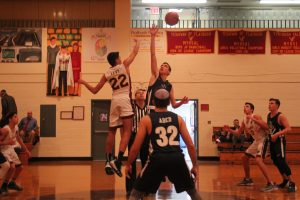 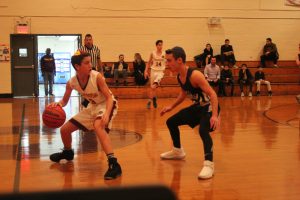 Shabot kept things going with a stealnand strong drive to the hoop tonite the second quarter, and Chaaya followed with a swish from 3.  Zhoni and Ronen controlled the paint, keeping YDE to one shot or fewer per possession. Shabot has the hot hand in the quarter, going for 8 points in the first three minutes (10 in the quarter). But it was the defense that allowed Flatbush to control the game, pressuring the Thunder guards the moment they crossed midcourt.  At the half, Flatbush was in the lead, 34-17. 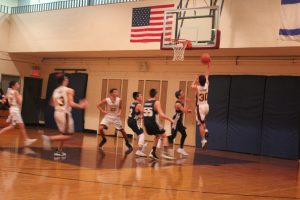 YDE wasted no time trying to set a different tone in the second half, hitting back-to-back threes on their first two possessions, cutting the deficit to 11 points and prompting Falcon Head Coach Gus Kennedy to call a timeout.  The defense improved, but the offense struggled, unable to score until more than three minutes passed.  With 4:40 left in the quarter, the score stood 36-25 Flatbush. The big play was a defensive save by Judah Regev that the Thunder gave up on, and which quickly got up the court and into the hands of Levy who skied for two.  The Falcons regained their scoring touch, and by the end of the quarter, had reestablished control and led by 20, 49-29. 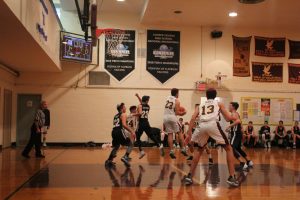 Much Like the third quarter, YDE came out shooting in the fourth quarter, and shaved five points off the lead in just one minute of play.  And, 1:17  later, the Thunder got another five points closer.  It was now a 10-point game with 5:38 left. Flatbush was completely out of rhythm, and after another turnover YDE drained another three. It was now a 51-44 ballgame. A turnover gave the ball back to YDE, but Morris Dweck came up with a steal, drew a foul and bounced home a pair of free throws to get the lead back to 9.  But, the Thunder shooters were feeling it, and they hit another three to close to 6 points.  Flatbush then found themselves with an opportunity to get back some distance from the line, but only scored two out of a potential 6 points.  With under three minutes left, the Falcons lead was down to 56-52.  And, after another Flatbush turnover, YDE drilled another three, making it a one point game with 2:07 to play.  Flatbush finally got a defensive stop, and when Irwin Azar hit a baseline floater, Flatbush regained a 4-point lead with 1:24 to play.  The teams exchanged turnovers, then Shabot matched a Thunder hoop to keep the lead at four. Incredibly, at that moment the Thunder bench was called for a technical, and after hitting one of the pair of free throws, Flatbush led by 5. YDE again connected on a three to cut it to two. The Thunder then fouled Azar, who went to the line with 15 seconds remaining.  He calmly stroked both to make it a two-possession game.  Hara closed it out with a huge block in the final seconds, securing the victory for the hosts, 54-50. 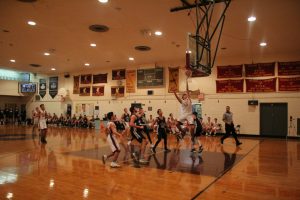 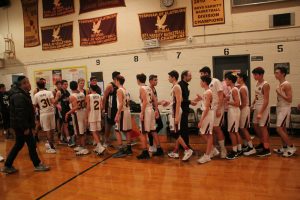 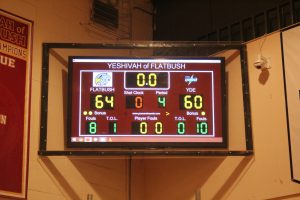 The Varsity squads took the court, and set out for a most spirited contest.  The stands were filled, and the teams were ready to go. 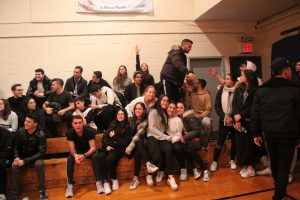 Jack Rosow got Flatbush off to a strong start with two quick inside baskets. And, when Noah Sedaka hit Rosow cutting to the hoop for another deuce, the Falcons had an 8-2 lead with half the quarter gone.  But, the Thunder put together a little run to cut the deficit to 1 point. An Issac Sutton reverse in traffic got the lead back to three, where it stood at the end of the quarter; Flatbush was in front 12-9. 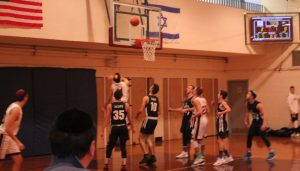 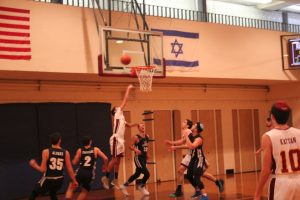 Kattan had a good look at a three, but missed; YDE had a look as well on their opening possession and made it, and the score was all even at 12-12.  Flatbush looked to feed the beast, and it worked as Lincer found Rosow all alone to take back the lead. But after Rosow had a rare miss at the rim, YDE made the falcons pay. The Thunder hit a three and had their first lead of he game, 15-14. The teams basically traded points the rest of the quarter, with Lincer and Rosow combining to stop YDE at the rim to earn Flatbush the last shot of the opening half.  It fell short and at the intermission, the lead belonged to YDE, 20-19. 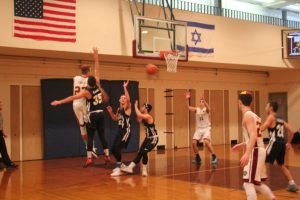 Lincer and Rosow both scored on tough shots at the rim and the falcons were back in the lead almost three minutes in, 23-22. But free throws continued to prove a conundrum for the Falcons, and when Kattan missed on a pair, YDE took advantage and scored a jumper to flip the score back in the Thunder’s favor.  YDE got some distanc when they hit a three with two minute left. Sutton answered on a baseline drive, and with 1:30 left, Flatbush got the ball back on a stop trailing 29-27.  The quarter was all about defense, and Flatbush got a final stop for a final shot, and Lincer made it count, flushing a jumper on the lane. With one quarter to play, it was all even, 29-29. 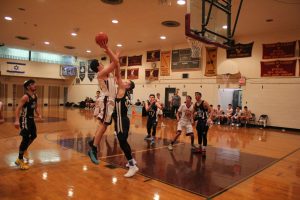 Flatbush had a number of chances to take he lead in he first two minutes, but could not get the ball to drop.  The defense was tough as well, but when YDE had four looks at the offensive end, they finally hit, and with 5:31 left to play, the Thunder had a two point lead and the ball.  They made it count, drilling a three, then taking a backcourt steal to the rim for a 36-29 lead, their biggest of the game.  Kal Abed finally ended the YDE run with a pair of free throws, but it was a five point game with 4:30 left to play.  30 seconds later, Abed pulled down a rebound and drew a technical foul against YDE. He deficit was four, but Flatbush missed on three chances to get closer, YDE got the next basket, and with 2:51 left, Coach Gurock wanted to talk things over with his boys trailing, 38-32.  Out of he timeout, Lincer halves the deficit with a corner three.  Lincer got it to one in a steal and lay in with 1:28 to play.  Leading 38-37, the Thunder now looked to bleed the clock.  Instead, they shot he ball, and made it count to push the lead back to three with under a minute left.  Out of a timeout, Flatbush pounded it inside, where Rosow drew a foul. He hit one of two, and r score stood 40-38 with 23.9 seconds to play. Flatbush was forced to foul.  They failed, though, and YDE got loose for a lay up and a 4-point lead with seconds left to play.  It was all over, as Flatbush came up short on two final attempts from the free throw line and YDE ran out the clock to seal the 42-38 win. 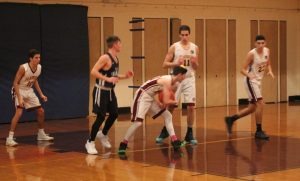 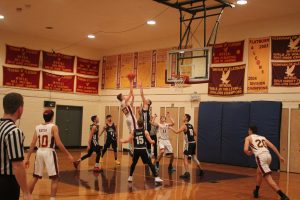 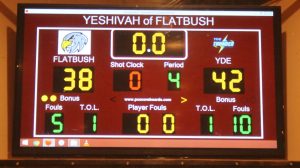 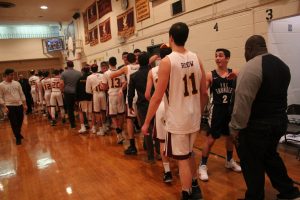