The Flatbush Varsity Wrestling Team held a home match for the first time ever on Wednesday night (12/26), hosting MTA in a friendly dual meet.  The visiting Lions topped the Falcons, but was most significant was that the contest was held in the home of the Falcons, at the Aux Nest in Brooklyn, NY. 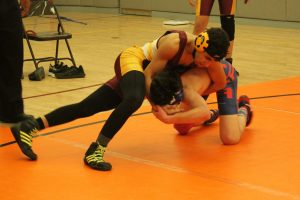 Since forming a team three seasons ago, the Flatbush wrestlers have always trained in the YoF HS gyms, but they had never been able to host a contest – that is, until now.  Under the leadership of Head Coach Michael Amuev, the wrestling program at Flatbush has been growing steadily.  But for the team to take the next step, he know it was important to be able to host events, not just participate in ones at other venues.  IN order to do that, the team needed mats purposed for wrestling.  This season, with the help of the Yeshiva Wrestling Association and former Yeshiva University Head Wrestling Coach Neil Ellman, Coach Amuev was able to identify a set of mats and procured them on loan from the YWA.  No longer needing to train on the school’s gymnastics mats, the team is not only able to train more effectively, they are now able to welcome guests to the Falcons Nest for head-to-head matches. 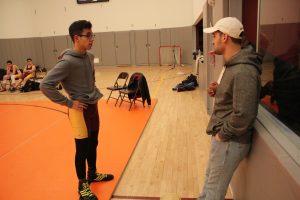 The mats were unfurled in the Aux Gym, and after weighing in, the Falcons set to warming up under the watchful eye of Coach Amuev.  MTA was late in arriving, but with the Lions now on site, the event was soon underway. 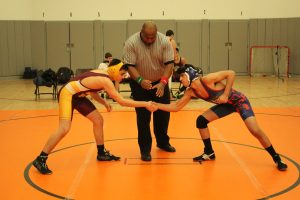 First up for Flatbush was OrDavid Menashe, wrestling at 126 lbs.  Of the young group of wrestlers, Menashe may be the most advanced, and he showed it.  Menashe was forced into a defensive battle, as his MTA opponent was much more experienced.  After sizing each other up and exchanging unsuccessful attacks, Menashe yielded the first points of the bout late in the first period.  By the end of the second period, Menashe was trailing on points, 6-1.  he knew he would have to change tactics to have any chance of winning.  So, Menashe moved to a more attacking approach, and it paid off, scoring a takedown to close the gap to 6-3.  But, time was running out.  His Lion opponent took advantage, and as the clock continued to wind down Menashe saw his attack turned against him for a takedown.  Menashe fought to escape as the clock ticked down, and in the final second of the third period, the official signaled the match over by pin.  It would be the only bout of the night to go almost the full three rounds. 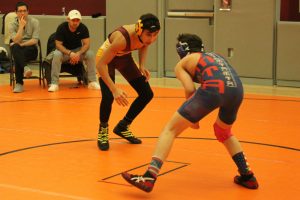 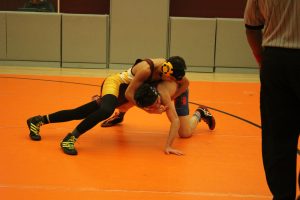 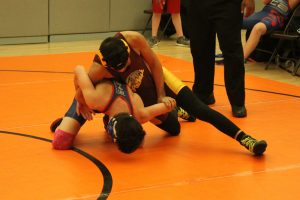 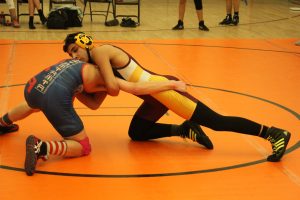 Next up for the Falcons was rookie Freshman Ben Dahan.  Wrestling at 138 lbs, it was Dahan’s first time taking on an opponent from another school.  It showed, as the bout was over in short order when his MTA opponent managed a quick take down and soon had Dahan’s shoulders pinned. 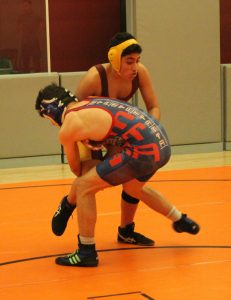 Leor Yazdi stepped out onto the mats next to wrestle at 145 lbs.  Yazdi has the next most experience on the young squad, and he battled his MTA counterpart hard.

Yazdi initiated the first attack, but soon found the tables turned and MTA scored the bouts first two points.  That was the score at the end of round one.  Staring period two in the down position, Yazdi soon evened the bout with a reversal, but after a minute in, MTA reversed back to regain the 2-point lead.  After moving out of bounds and resetting at the center of the mat, Yazdi again gained a reversal to tie the bout, but he could not maintain control and he was reversed back.  After another reset at the center of the mat, Yazdi again reversed his opponent to tie the bout at 6-6. Yazdi had the advantage, and looked like he might succeed in putting the Lion on his back, but the official called a dangerous hold, and reset the pair at the center of the mat with 4.0 seconds left in the period.  This time, Yazdi was on top, and as the clock expired, the official awarded a controversial two-point escape to MTA stating that the Lion successfully separated Yazdi’s grip from around his waist.  The score now stood 8-6 with one round remaining.  With both wrestlers starting in the up position, the MTA wrestler went on the attack immediately.  Yazdi was caught off guard and was immediately taken down.  Ten seconds later, Yazdi was on his back and pinned.  It was a disappointing end to a well-contested bout. 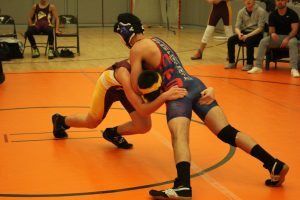 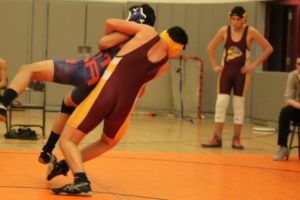 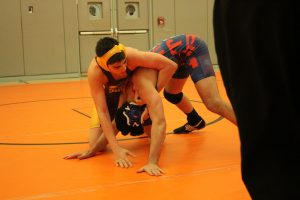 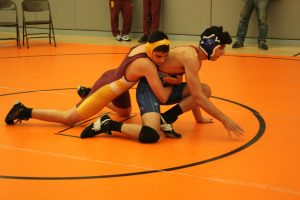 The next bout saw Flatbush’s Joseph Kamkhatchi step onto the mat to wrestle at 152 lbs.  Kamkhatchi fended off the initial attack successfully, but soon was taken down by his MTA opponent.  He battled hard, but with 12 seconds left in the opening round, Kamkhatchi was maneuvered onto his back and pinned. 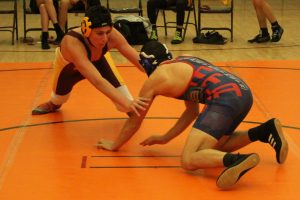 The final bout of the night was an exhibition, meaning the combatants were both new to wrestling and this would be their first taste of competition.  It was at the 113 lb. weight class, and Flatbush’s neophyte competitor was Eli Cohen. 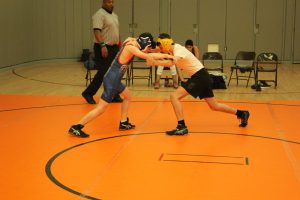 The first period was a stalemate, but Cohen fended off the first attack from MTA successfully, and tried to initiate the next two attacks, though both did not provide any points for Cohen.  At the end of the first period, the bout was still tied 0-0.   Cohen initiated two strong attacks at the outset of the second period, but he left himself open after the second, and MTA moved in to score the first two points of the bout.  Cohen nearly worked an escape, but the buzzer sounded to end the second period, and MTA held a 2-0 lead.  MTA scored an immediate takedown to start the third period.  Cohen tried to drag his opponent out of the ring for a reset, then almost stood up into an escape.  He was pulled back down, but eventually got to the outer boundary, and the official reset the wrestlers at the center of the mat.  With 31 seconds remaining, Cohen desperately tried to earn an escape.  Meanwhile, MTA was looking to record a pin.  The Lion soon got leverage on Cohen and turned him on his back, but Cohen was not conceding anything.  Cohen stayed off his shoulders.  The buzzer sounded.  The official awarded MTA another two points for a near fall. MTA won the bout on points, 6-0, but Cohen successfully denied his opponent the pin. 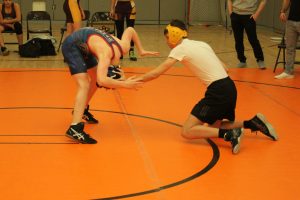 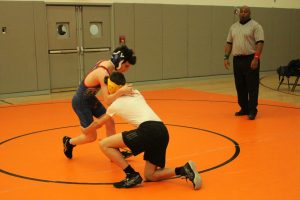 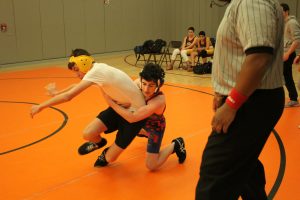 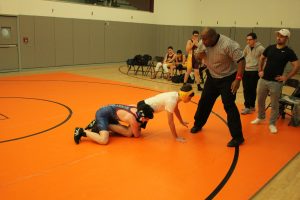 Afterwards, Coach Amuev reflected on the performance of his young wrestlers and the significance of being able to finally host meets at Flatbush.

“Everyone who wrestled tonight was either a freshman or sophomore. MTA is a long time elite program in the yeshiva wrestling world, and their experience was displayed last night. Sophomore Or Menashe wrestled a tough bout against a veteran on the MTA team and he put up a pretty good fight until his stamina caved late in the match. Leor showed a lot of promise executing the high level switch/reversal move on bottom twice in the same match which his opponent couldn’t defend (despite getting bit to a more experienced wrestler at a higher wight class). Both Joseph and Ben wrestled experienced wrestlers respective to their current  first year experience, having only wrestled one match before; and are just that much more motivated to push themselves harder at practice from now on. The exhibition bout with Eli was a last minute add on; after only stepping foot on the wrestling mat for the first time 2 weeks ago. Nevertheless, he boldly accepted the decision to wrestle an exhibition bout just to have some experience under his belt.”  Amuev went on, “Overall, this was a good learning experience, and will be a good motivator for the kids to know what to train for in their season to come.  It is another big step in building the program.  Having our own mats not only makes training much more effective, but as you can see it allows us to host events in our own building.  Our kids work really hard off the mat, and are putting in a lot of hours on it as well.  Tonight was not about winning, it was about competing, about testing ourselves against other wrestlers.  The more we can do this, the better our boys will be.  We are definitely moving in the right direction!” 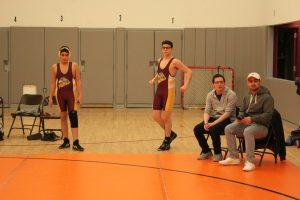 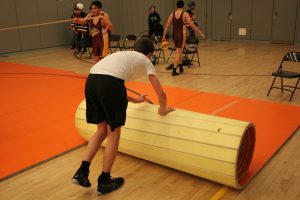 NEST NOTES:  This was the first home match ever for the Falcons, and the second of the season for this group of Flatbush wrestlers.  The team is training hard with an eye on the annual Wittenberg Invitational Tournament, bringing together the top wrestling programs in the yeshiva world from across the USA.  The meet is scheduled for President’s Weekend, February 15th and 17th, and will be hosted at The Frisch School in Paramus, New Jersey.