The Flatbush Boys Middle Division Hockey team joined with rival opponent Magen David on Saturday night (12/29) with the idea of using their final match up of the regular season to do more than just play hockey.  The squads used the opportunity to raise both awareness and funds for a community chesed project, and in the process entertained a packed house to an end-to-end hockey game, which was won by the host Falcons at the Aux Nest in Brooklyn, NY. 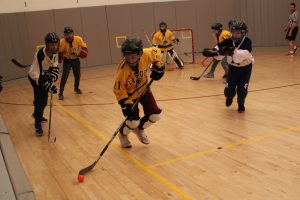 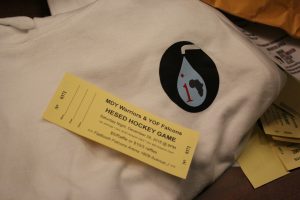 As the teams finished warming up and the crowd continued to file in to the stands, the leaders of both teams gathered all the boys at the middle of the gym.  Magen David Head Coach James Lassner welcomed the crowd and and Flatbush Head Coach Daniel Esses loaded up a video and showed it on the Jumbotron for the capacity crowd.  The coaches pointed out that the teams wanted to do more than just play a game, they wanted it to serve a greater purpose. They wanted to do chesed, and they chose Innovation: Africa as the beneficiary of their efforts.  Innovation: Africa is a nonprofit organization on a mission to bring innovative Israeli solar and water technologies to remote African villages. They have provided one million people across Africa with access to vaccines, light and water. (Please go to https://www.innoafrica.org/ to learn more about Innovation: Africa and how you can support the humanitarian efforts of the organization). 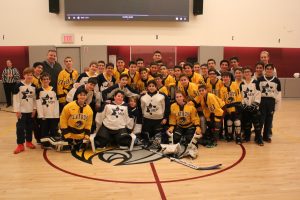 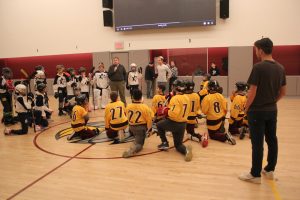 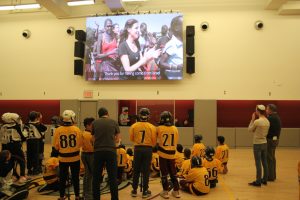 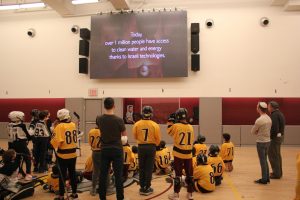 It was then time to get the action underway. 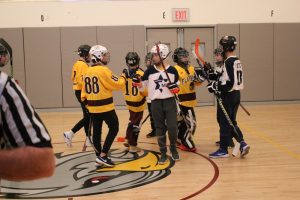 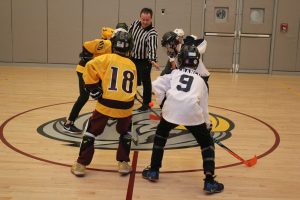 The Flatbush defense held the mid-line effectively, keeping the majority of the early play in the Magen zone.  Joe Gindi had two great scoring chances, but the Magen keeper made a great save. Gindi had his best chance of the opening moments almost 4 minutes in, but fanned on the shot. But, he immediately regrouped and with the defense in flux, he stuck his next shot under the goalie’s pads to give Flatbush the early 1-0 lead at the 8:04 mark of the opening period. Flatbush kept the pressure on, and Caesar Tbeile capitalized on the offensive rush poking the puck home for the Falcons’ second goal.  With three minutes left in the period, the Warriors got a shot past Morris Hanon, but Hanon was picked up by a goalie’s best friend – the left post.  Flatbush took the puck the other way, and it was the Falcons that scored next on a blast from Marc Salame.  With under a minute to go, Flatbush added to their total when Jake Bibi put one home. At the first intermission, the score stood 4-0 with the Falcons out in front of the Warriors. 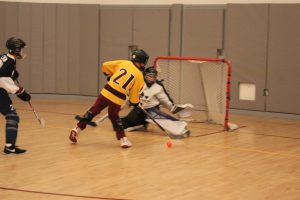 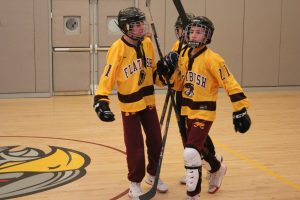 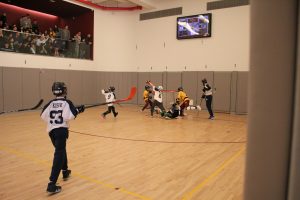 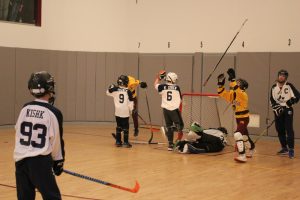 It was a fairly clean game, but three minutes into the second period, Magen took the first penalty of the game, and Flatbush was on the power play.  With only 15 seconds left Eddie Dweck made the Warriors pay for the error, taking a 5-goal lead for the Falcons.  The next few scoring chances belonged to Magen David, and it looked like they would get on the scoreboard, but Hanon continued to come up with big saves. The Magen goalie returned the favor as Dweck looked to have a sure goal, but he got his glove down just in time to deny Dweck’s scoring chance.  At the other end, Hanon continued to make big saves. But, the Warriors finally solved him, though, getting on the board with 1:30 left in the period.  After two periods of play, Flatbush was still in the lead by 4, 5-1. 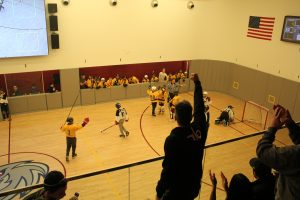 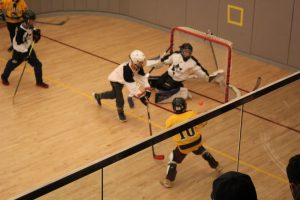 Flatbush HS Senior Joe Kattan addressed the crowd during the second intermission, sharing more information on how people could support he community’s efforts for Innovation: Africa.  “Our goal as a community is to raise $75,000 to sponsor a village. We are Selling sweatshirts and raffle tickets,” said Kattan.  “Or, if anyone just wants to make a donation, it is greatly appreciated.  Everything helps!” 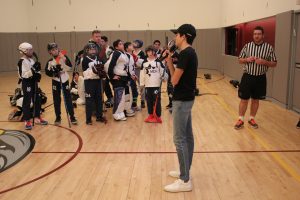 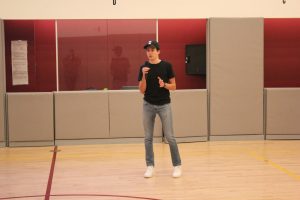 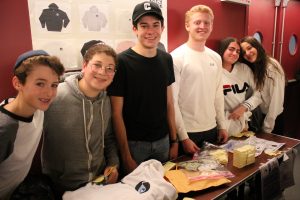 Flatbush pressed on offense early in the final period, but it was Magen that got the next goal with just over two minutes gone, leading to chants of “M-D-Y!, M-D-Y!” from the visitors section of the bleachers. The Warriors had the momentum, and they kept the pressure on Hanon and the Falcon defense.  The Falcons weathered the storm, but soon the officials called a double penalty. At 8:14, the teams were playing 3-v-3.  However, neither team could take advantage of the now wider open space on court. The clock hit 5:56, and the teams changed ends with Flatbush holding on to the 5-2 lead.  Both goalies continued to make tough saves. Then, with 2:33 remaining, Gindi pushed the Falcons lead back to 4.  Flatbush got two more goals in the final minute of play to get to the final score. Flatbush 8, Magen David 2. 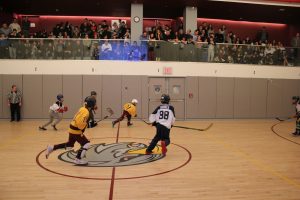 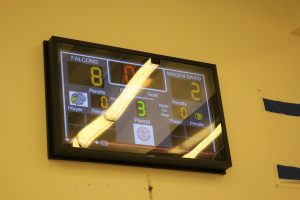 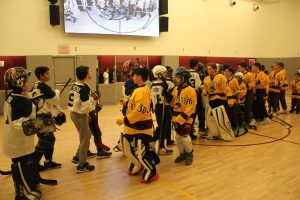 But tonight, the real winner was the entire community, and Innovation: Africa! 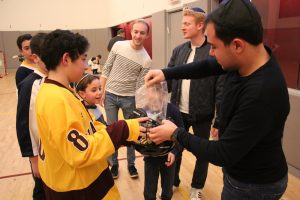